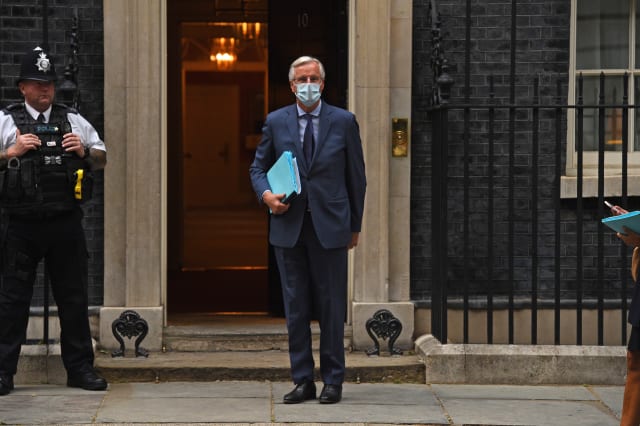 Michel Barnier has said he had a “useful discussion” with Boris Johnson’s Europe adviser, David Frost, as the pair try to inject some movement into UK-EU trade talks.

The latest talks come after the Prime Minister told German Chancellor Angela Merkel that the UK would be prepared to walk away without a trade deal at the end of the year.

Mr Barnier said the negotiators are “working hard for a fair agreement” with the UK, including on the key sticking points of fisheries and the “level playing field” arrangements designed to prevent the UK undercutting the EU by lowering standards and increasing state subsidies.

The two lead negotiators dined on chargrilled asparagus, followed by a fillet of halibut and then a terrine of summer fruits.

On Tuesday, the PM spoke to Mrs Merkel and told her that the UK “would be ready” to leave the transition period at the end of the year on Australian terms – the Government’s preferred  expression for leaving without a trade deal.

A Downing Street spokesman said: “On the future relationship, the Prime Minister underlined the UK’s commitment to working hard to find an early agreement out of the intensified talks process.

“He also noted that the UK equally would be ready to leave the transition period on Australia terms if an agreement could not in the end be reached.”

Mr Johnson has been adamant that he will not allow the discussions to drag on into the autumn, arguing that British businesses and citizens need certainty on the way forward before then.

If the two sides are unable to reach a deal by the end of the current Brexit transition period at the end of the year, it will mean Britain leaving the single market and the customs union without any agreement on future access.