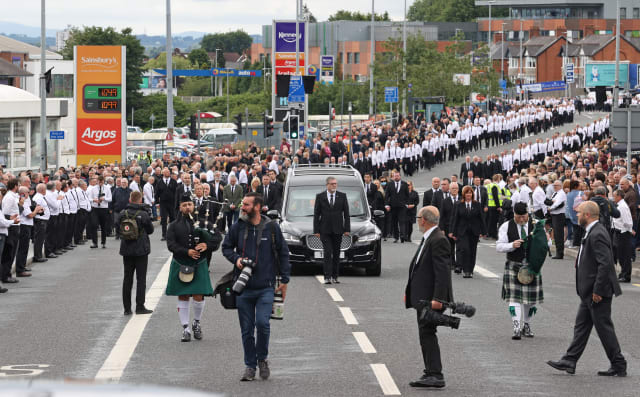 Trust between the Stormont Executive and the public cannot be rebuilt without an “acknowledgement” of damage caused by the attendance of ministers at a funeral where coronavirus regulations “were breached”, Northern Ireland’s justice minister has said.

Naomi Long said the response from Sinn Fein around the gathering of hundreds of people at a service for senior republican Bobby Storey “doesn’t respect people’s intelligence”.

Ms Long was speaking hours before MLAs debate whether to urge Deputy First Minister Michelle O’Neill and finance minister Conor Murphy to apologise over their attendance.

Ms Long said Ms O’Neill “has yet to acknowledge the harm that has been done to the reputation of the Executive and to her own standing”, which she described as “regrettable”.

A group of 30 walked in the funeral cortege in west Belfast, while hundreds lined the route from St Agnes’ Church to Milltown Cemetery.

Police are investigating whether any social distancing breaches occurred.

It later emerged that Mr Storey had been cremated at Roselawn cemetery in the east of the city where 30 people were allowed to attend an outdoor committal service.

The other eight cremations that took place on the same day were not allowed services at the site.

Belfast City Council has apologised to those families.

Ms Long described it as a “very unfortunate situation”, adding it is “important” that MLAs later have the opportunity to express their views”.

She told the BBC: “I believe the guidance was breached, I think that this was a large event, I think to use a technicality that there were only 30 people in the cortege – when there were clearly hundreds of people at an event that was not just happening while she was there but actually being stewarded by Sinn Fein – doesn’t really respect people’s intelligence.

“It’s very clear that what happened at the Storey funeral was way above and beyond 30 people gathering, it exceeded what was permitted for a funeral and there is no question in my mind that the regulations were breached.”

The Alliance leader also called for a start to rebuilding “the trust that has been broken between the public and the Executive”.

“I think that the starting point for that is an acknowledgement that what happened has broken that trust, and I think that unless we have that, it is very difficult to see how you can start to rebuild the relationships that have been damaged,” she added.

DUP First Minister Arlene Foster has asked her powersharing partner to step aside while officers consider the matter.

An Assembly motion has been signed by the DUP, UUP, SDLP and Alliance Party and is due to be debated on Tuesday evening.

It acknowledges the sacrifices made during the coronavirus emergency.

The motion “pays tribute to those who selflessly prioritised the need to keep each other safe above their own personal needs, particularly during times of trauma, loss and grief; expresses disappointment in the actions of those in ministerial office who breached public guidance and failed to share in the sacrifice that we have asked of others; implores members of the public to stay with us and to continue acting in accordance with the regulations in order to keep each other safe and prevent further deaths; recommits to upholding the spirit and the letter of the Covid-19 regulations and the related public health guidance; and calls on the Deputy First Minister and the minister of finance to apologise for their actions, which have caused immense hurt”.

Mrs Foster said the episode had damaged her partner in government’s credibility in delivering coronavirus safety messages and has halted joint press conferences.