Patel: No new target date for migrant crossings to be ‘infrequent phenomenon’ 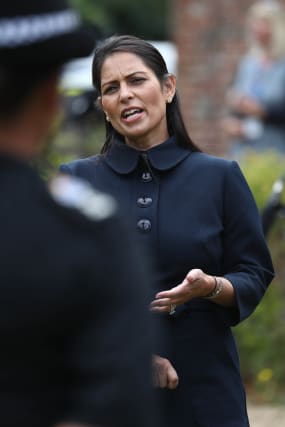 There is no new target for when illegal migrant crossings should have become an “infrequent phenomenon”, the Home Secretary has said.

Priti Patel said the crossings are a “complicated issue” and the English Channel has become “far too viable for criminals”.

Less than a year ago she vowed “urgent action” on the dangerous crossings, aiming for them to be virtually eradicated by spring this year.

But at least 2,324 migrants have crossed to the UK in the first six months of 2020, analysis by the PA news agency reveals.

The journey across the world’s busiest shipping lanes has been attempted in all manner of small boats, from inflatable dinghies to kayaks.

More migrants are believed to have reached UK shores on Tuesday.

Speaking exclusively to PA on Monday afternoon, the Home Secretary said there are “far too many crossings”.

She was asked if there was a new target date for the crossings to be reduced to an “infrequent phenomenon” – a reference to her pledge in 2019.

Ms Patel replied: “No. The fact of the matter is, I’ve said from day one this is a complicated issue. Illegal migration has been a feature of every single Government.

“The fact of the matter is, and I have repeatedly said this, when it comes to small boats in particular that is a route that has become far too viable for criminals.”

Since the UK’s Covid-19 lockdown was announced on March 23, at least 1,946 migrants have crossed to the UK.

The Home Office has repeatedly said coronavirus has had no impact on its ability to respond to migrant crossings.

Ms Patel added: “Camps in Calais, northern France has become a magnet basically for criminals to come in, facilitate people trafficking and that’s why we have to work with the French authorities to get on top of this and stop this.”

Tony Smith, the former head of UK Border Force, told PA last week that the only way to stop the crossings was for the UK and France to agree a deal whereby migrants picked up in the Channel would be returned to France.

Asked if he had confidence in Ms Patel to obtain such a deal from the French, Mr Smith said: “I don’t know, is the short answer to that.”

“We call on them to provide safe and legal passage for those seeking sanctuary in the UK. This would stop the dinghies overnight and would mean we knew exactly who was arriving and when.”