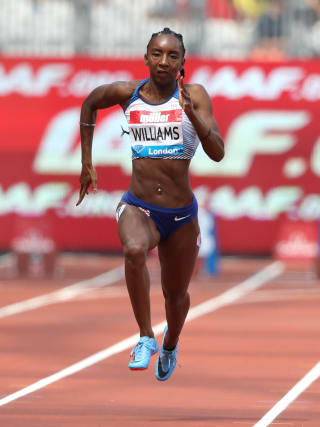 Shadow justice secretary David Lammy has described video of a police stop and search involving athlete Bianca Williams as “shocking, shocking footage that anyone in their right mind would be alarmed about”.

The Team GB sprinter has said officers had racially profiled her and her partner Ricardo dos Santos – a Portuguese 400m sprinter – when they pulled them from their Mercedes in a London street, handcuffing them and separating them from their three-month-old son.

The Metropolitan Police said on Monday its Directorate of Professional Standards had revisited body-worn footage and social media videos of Saturday’s incident and found no misconduct issues.

But Mr Lammy, the Labour MP for Tottenham, told PA such incidents are “diminishing trust among black populations in the criminal justice system”.

Speaking on Tuesday at the launch of a new public art display celebrating the work of artist Khadija Saye, who died in the Grenfell Tower fire, Mr Lammy said: “I’m afraid there has been far too much footage now of what feels like incredibly heavy-handed policing of black people not just in London but across the country and this is a moment I think to pause and ask ourselves deep questions that are coming up in relation to black lives matter.

“Why is it that this is persistently happening? It’s diminishing trust among black populations in the criminal justice system.

“These are issues I raised in the review I was asked to do by David Cameron and it’s very, very concerning that here we are three years later and these issues remain perennial.”

Ms Williams has said she is considering legal action against the Met, saying: “I feel very hurt by their actions, and to witness my partner being taken away and for me to be taken away from my son, my heart hurts.”

Footage of the incident was shared widely on Twitter after being posted by former Olympic medallist Linford Christie, who questioned why the vehicle had been stopped.

Nothing was found in the search, which the Met said was carried out by officers patrolling the area in response to an increase in violence involving weapons.

The force also said the vehicle was seen driving suspiciously, including on the wrong side of the road, and that the driver sped off when asked to stop.

In a statement on Monday, Commander for Central West Helen Harper said while no misconduct issues had been found, “that does not mean there isn’t something to be learnt from every interaction we have with the public”.

She continued: “Myself and Chief Superintendent Karen Findlay, who is in charge of the Territorial Support Group, are really keen to speak personally to the occupants of the vehicle to discuss what happened and the concerns they have.”

Mr Lammy’s intervention comes after his boss, Labour leader Sir Keir Starmer, a former director of public prosecutions, said on Monday that he could see no justification for the use of handcuffs during the incident and said he would “feel uncomfortable” if he were a senior officer watching the footage.

London mayor Sadiq Khan also said he takes allegations of racial profiling “extremely seriously” and that he has raised the case with the force.