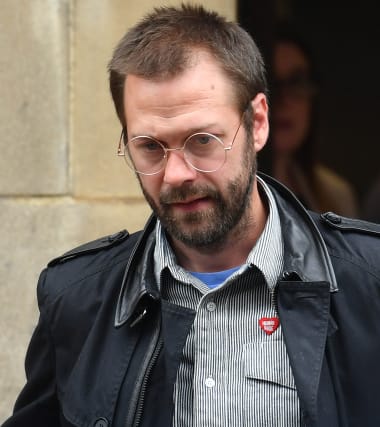 Former Kasabian frontman Tom Meighan has admitted assaulting his partner in a drunken and “sustained” attack.

The 39-year-old, who left the group on Monday citing personal reasons, appeared at Leicester Magistrates’ Court on Tuesday and pleaded guilty to assaulting Vikki Ager on April 9.

A district judge ordered him to carry out 200 hours of unpaid work for the offence.

The court was told Meighan “smelt heavily of intoxicants” as he “threw the victim across the room in a rage”.

Ms Ager hit her head on a hamster cage after being thrown across the room.

The defendant also grabbed her leg and struck her on the head before threatening to hit her with a wooden pallet.

The court heard a child witnessed the assault and contacted 999 to say a “domestic incident was taking place”.

Prosecutor Naeem Valli said the child “sounded panicked and afraid” while making the call and the victim could be heard saying “get off me, get off me”.

Mr Valli said officers described Ms Ager as being “visibly upset” while Meighan was said to be “unco-operative and aggressive”.

Meighan, of Narborough, Leicestershire, originally denied an assault had taken place but after watching video footage he told officers he could not watch it any further because it was “horrible”.

The court heard Ms Ager suffered bruising to her knees, left elbow, outer ankle and big toe as well as a reddening around the neck, which she confirmed to officers was as a result of the assault.

Mr Valli told the court the offence “could be argued to be relatively serious”, describing it as a “sustained assault”.

Sentencing Meighan, District Judge Nick Watson said: “Ms Ager has not made a statement to police and does not appear to support this prosecution. Of course, that choice does not mean I should treat this offence any less seriously.

“You knocked Ms Ager over on more than one occasion and put your hands to her throat.

“You hit her in the face and pushed her into a hamster cage, which resulted in injury to her head.

“You threatened her with a wooden pallet. It seems you thought better of it, thankfully, and threw it down on the hot tub aggressively.

“Throughout most of the video she could be seen fighting you off.

“There are a number of things which make this offence more serious. A child was witness to this behaviour and she must have been frightened over what was happening.

“The police have been called before and there is evidence of previous abusive behaviour. Ms Ager says what happened was an isolated event.

“I need to take account of the fact that not only did you hurt Ms Ager, you also let down many people – band members and those who love your music. They will be shocked about what you did that night.

During the 90-minute hearing, CCTV of the attack was played in court as Meighan wiped his eyes with a tissue and held his head in his hands.

Defending him, Michelle Heeley QC told the court he “offers his sincere apologies to the people he has let down and he has sought to address his offending behaviour”.

Ms Heeley had made an application to the court for Meighan’s address to be withheld from the public, quoting “high-profile cases such as Caroline Flack who committed suicide in similar circumstances”.

The judge dismissed the application after submissions from the PA news agency said a section 11 order banning the publication of a defendant’s address was “not enacted for the comfort and feelings of defendants”.

The singer quit Kasabian on Monday, with the band releasing a statement saying he was dealing with “personal issues” and wanted to concentrate on “getting his life back on track”.

Stormont and Westminster urged to step in to save aviation jobs