Don’t be ‘dogfished’, charity warns after pups covered in oil rescued from van 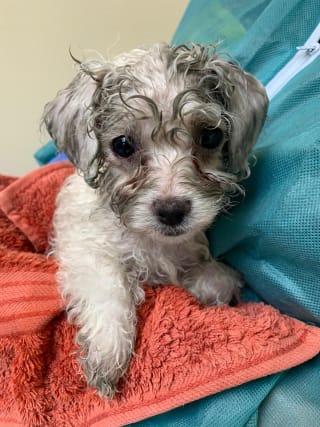 Animal lovers are being warned about the perils of being “dogfished” after six puppies drenched in oil were rescued from the back of a van.

The Dogs Trust said people should be aware of the risks of buying dogs via online adverts.

The charity said demand for puppies has spiked during lockdown and it has rescued dozens of smuggled pups worth tens of thousands of pounds that were destined to be sold on to unsuspecting UK buyers.

In the latest pup-smuggling bust, six young dogs were found covered in sticky oil in the back of a van at Dover port.

They had been illegally imported from Romania – underage and after a journey that would have taken more than 24 hours – despite the coronavirus lockdown restrictions in the UK preventing non-essential travel, the charity said.

Paula Boyden, the Dogs Trust’s veterinary director, said: “It is absolutely heartbreaking that we continue to see dogs being illegally imported into the country, often in terrible conditions to make huge profits for cruel puppy smugglers.

“We might be in the midst of a pandemic, but these devious sellers will still use every trick in the book to scam unsuspecting dog lovers.

“Sadly, it’s all too easy to be dogfished and it can be very difficult to know if you are buying a puppy that has been smuggled.”

The three Maltese, two Havanese and one bichon frise pups, aged around 11 weeks old, were found in an appalling condition and suffering from diarrhoea.

All had to be shaved to get rid of the oil and are now in the Dogs Trust’s care and will be rehomed responsibly when they are fit and able.

The charity has also saved 12 heavily pregnant mothers, who have given birth to 53 puppies worth around an additional £100,000 to cruel smugglers.

Ms Boyden added: “We would advise you to always see a puppy with and interacting with their mum and go and see it more than once.

“Ask lots of questions, and ask to see vital paperwork, such as a puppy contract. If you have any doubts or it feels too good to be true, as hard as it may be, walk away and report the seller.”

The charity is asking the nation to consider whether now really is the right time to be getting a dog and, if it is, to make sure they are sourcing their puppy responsibly without falling victim to illegal puppy smugglers.

The Dogs Trust’s Puppy Pilot scheme has rescued 1,167 dogs since it began in December 2015, with the most popular breeds including dachshunds, French bulldogs, Maltese and even larger breeds such as chow chows.