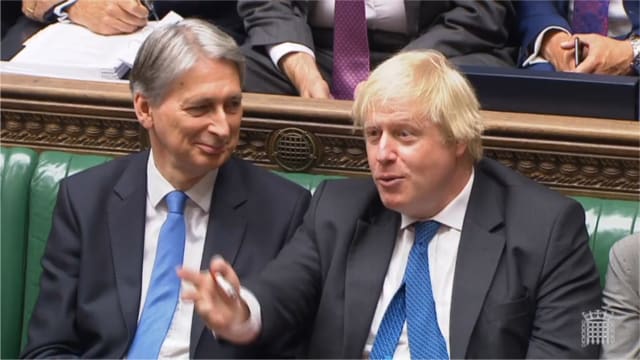 Boris Johnson’s administration has been urged not to put relations with China on ice after the Asian powerhouse was accused of attempting to persuade influential individuals to support Huawei’s integration into the UK’s 5G network.

A controversial dossier – reportedly compiled with the help of former MI6 spy Christopher Steele – has claimed that high-profile people were targeted to act as “useful idiots” for Beijing.

The Daily Mail reported that the 86-page document said politicians and academics were among those in the UK whose backing China sought to secure.

Following the reports, former chancellor Philip Hammond warned the Government it should not turn its back on China despite “strong differences of opinion on a number of issues”.

The ex-Tory MP told BBC Radio 4’s Today programme: “Right now, the UK is in the process of loosening its ties with trade partners in Europe in the name of expanding its global reach.

“It seems to me this is not a time to be wanting to weaken our trade links with the world’s second largest economy.

“We have to find a way, and I think we have done it in the past with many countries, of continuing to trade, continuing to invest and welcome investment from countries with which we have frank disagreements about political issues.”

Mr Hammond’s intervention comes amid intense pressure on Mr Johnson from his own backbenches to halt Huawei’s involvement in the 5G rollout over concerns that it presents a security risk.

Ex-foreign secretary Mr Hammond said he was “concerned about an “alarming” outbreak of anti-Chinese sentiment within the Conservative Party”.

The Prime Minister’s move to allow the company a role set the Government at odds with the US, which had repeatedly warned against the firm amid clashes with China.

A spokesman for the Chinese telecoms giant described the allegations as “unfounded”, and said they were part of a “long-running US campaign” against the company.

Dr Huiyao Wang, president of the Centre for China and Globalisation and an adviser to the Chinese government, urged ministers not to indulge in a “conspiracy theory” about Huawei.

He told the Today programme: “The UK is a country that invented a lot of trade formats and now it is getting more independent, has a lot of soft power.

“It should really take a lead on safeguarding the multilateral trading system, including technology usage around the world, rather than going back to conspiracy theory, and really has no hard evidence and no proof to deny a company of the most advanced technology in the world.”

Culture Secretary Oliver Dowden said on Monday that US sanctions on Huawei were likely to have a “significant impact” on the firm’s ability to play a role in the UK’s 5G network.

Business Secretary Alok Sharma followed up on those comments by confirming a review was “ongoing” as ministers discuss a National Cyber Security Centre (NCSC) report on Huawei.

Speaking to the Today programme on Tuesday, Mr Sharma said: “I don’t want to go into the details of a particular country but you will know that, as a result of the initial sanctions that the US has put in place against Huawei specifically, we are having a look to see what the impact would be on UK networks.

“There is a process ongoing, we will see what that review comes to and we will set out our next steps.”

During an online press conference on Monday, he warned of “consequences” if Britain wanted to make China a “hostile country”.