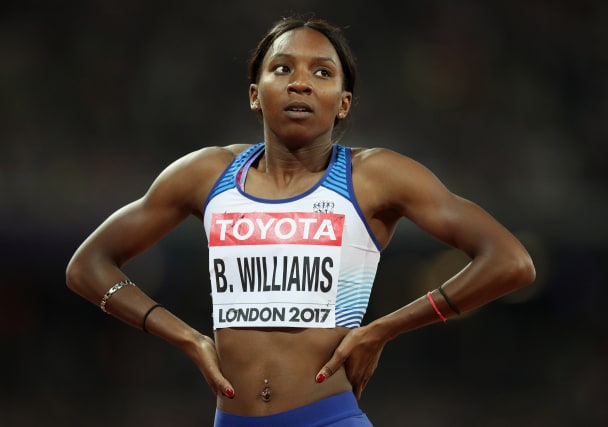 A Team GB sprinter is considering legal action against the Metropolitan Police after accusing officers of racially profiling her and her partner in a stop and search.

Ms Williams, whose three-month-old son was in the car during the incident, called it an “awful experience” and believes the couple were targeted because they are black and drive a Mercedes.

“They (the officers) said there’s a lot of youth violence and stabbings in the area and that the car looked very suspicious,” she told BBC Radio 4’s Today programme.

“They see a black male driving a nice car, an all-black car, and they assume that he was involved in some sort of gang, drug, violence problem.”

Scotland Yard said a 25-year-old man and a 26-year-old woman were searched when a car was stopped in Lanhill Road, Maida Vale, on Saturday afternoon.

The force said the vehicle was stopped after it was seen driving suspiciously, including on the wrong side of the road, and that the driver had sped off when asked to stop.

But this account was refuted by Ms Williams, who said the car was “never” on the wrong side of the road.

“That is false, we were never on the wrong side of the road. We were driving down through single-width roads,” she told the programme.

“We only found out about us driving on the wrong side of the road once they tweeted in on Saturday afternoon.

“This isn’t the first or fourth or fifth time – it must be about the 10th (her partner has been stopped by police), it’s getting ridiculous.”

She said “Yes, 100%” race is the reason why he gets stopped, adding: “It’s just horrible, it’s an outrageous assumption for them to make.

“We are planning on taking it down the legal route. I feel very hurt by their actions, and to witness my partner being taken away and for me to be taken away from my son, my heart hurts.

Footage of the incident was shared widely on Twitter after being posted by former Olympic medallist Linford Christie, who questioned why the vehicle had been stopped.

The clip appeared to show two people – a man and a woman – being pulled out of a car in a London street.

The woman says “He didn’t do anything” and officers can later be heard telling the woman to calm down after she worries about her son remaining in the car.

Scotland Yard said officers from the Directorate of Professional Standards have reviewed footage from social media and officers’ bodycams and were satisfied there was no concern around the officers’ conduct.

Commander Helen Harper said: “I understand the concern when incidents like this happen and how they can appear when part of it is filmed without context.

“Due to the concern raised, we conducted a review of the stop. This included social media footage and body-worn camera footage of the officers at the scene.

“We are satisfied that there are no misconduct issues.”

Jenrick: "We don't want to return to blanket restrictions"