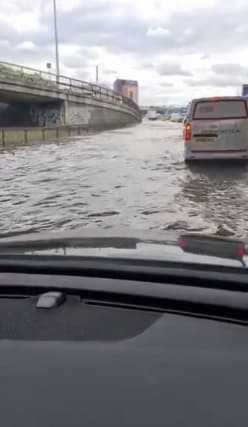 Eight people had to be rescued after vehicles were trapped in water on a major road in north-west London.

Firefighters helped motorists stuck in half a metre of water on the North Circular road near Brent Cross.

Thames Water said a burst main on the road had led to low water pressure or no water at all for the NW2, NW4, & NW11 postcodes.

A spokeswoman for LFB said: "We assisted with getting eight people out of their vehicles, that were trapped in their vehicles due to half a metre depth of water."

Labour MP for Brent North Barry Gardiner shared footage which appeared to show a number of cars stranded in floodwater.

He tweeted: "To all my constituents travelling home this evening intending to use the North Circular. Please be aware of the flooding at the Brent Cross intersection."

A spokeswoman for Thames Water said: "We're sorry to anyone who has been disrupted by a burst pipe on the North Circular Road.

"We know this has happened at an especially difficult time and understand the concerns our customers may have.

"Our specialist engineers are on their way to investigate the problem, and they will be doing everything they can to resolve the issue as quickly as possible."