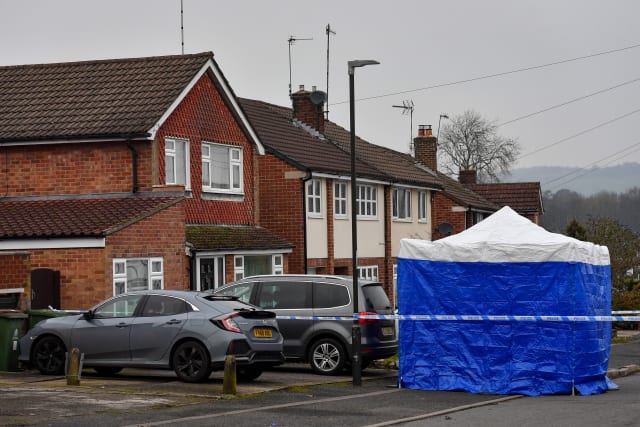 An estranged husband has admitted murdering his wife and her lover who were both found fatally stabbed on New Year's Day.

Former head teacher Rhys Hancock killed Helen Hancock, 39, from Duffield, Derbyshire, and Martin Griffiths, 48, from Derby, at the former marital home – before calling police to tell them what he had done.

Mrs Hancock, a PE teacher, and father-of-two Mr Griffiths were discovered with multiple stab wounds at the detached property in New Zealand Lane, Duffield, after police were first called at 4.11am.

A court previously heard how Hancock's mother, Denise Hancock, rang the police to tell them her son had left her address – explaining that the defendant had found out on Boxing Day that his wife had been seeing another man and it had caused him "some distress".

The 40-year-old's mother told police her son then left her home, taking two knives with him, and that he seemed "calm" but she was concerned he was going to do something because he had said earlier he "felt like killing them".

Prosecutor Jeanette Stevenson also previously told South Derbyshire Magistrates' Court that the defendant rang 999 at 4.26am and told the police operator he was at the former marital home, that he had murdered his wife and Mr Griffiths, and said the children were safe at his mother's.

A police dog handler was first on the scene, and immediately ordered Hancock to the floor before arresting him.

Both victims were found in a bedroom with multiple stab wounds.

Mr Griffiths had already died but paramedics battled for more than 15 minutes to resuscitate Mrs Hancock, but she died despite numerous attempts.

On Monday, Hancock admitted both murder charges in a virtual hearing at Derby Crown Court.

Judge Nirmal Shant QC took the unusual step of putting the charges to the defendant herself after problems with the court clerk's microphone.

Paying tribute to Mrs Hancock, her family said in a statement: "The family are devastated at the loss of Helen, who was a lovely, beautiful, friendly, bubbly and social person."

Mr Griffiths's family also paid tribute, saying: "Martin was a lovely dad, husband, son, brother and uncle who had a passion for adventure, running and a love of animals."

Hancock, formerly of Portland Street in Etwall, Derbyshire, will be sentenced at a date to be fixed.