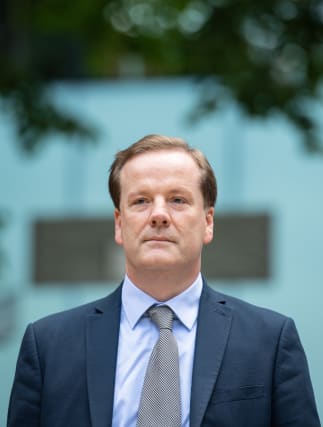 Former Conservative MP Charlie Elphicke chased a woman around his kitchen and chanted "I'm a naughty Tory" after sexually assaulting her, a court has heard.

Elphicke talked to the woman about bondage then allegedly groped her breast and tried to kiss her, leaving her "distressed, and almost hysterical" while his wife Natalie Elphicke was away in 2007, a jury was told.

Southwark Crown Court also heard Elphicke sexually assaulted a parliamentary worker in her twenties several years later after he became MP for Dover, telling her: "Oh I'm naughty sometimes aren't I? I can be so badly behaved but I can't help it."

Both woman rejected his advances, with the parliamentary worker describing a "disgusting slobbery mess" when Elphicke tried to kiss her before groping her.

In a separate incident some time later, Elphicke rubbed his hand up her leg towards her groin, she said.

Prosecutor Eloise Marshall QC told jurors that Elphicke's first alleged victim, who was in her early thirties, was "flattered" when Elphicke – 36 at the time – had invited her to share a drink with him at his home.

He opened a bottle of £40 wine and began asking her about her sexual interests, including if she liked "lace and leather", and saying he liked "bondage and whips", jurors were told.

He then assaulted her on the sofa, reaching into her top to grope her right breast and trying to kiss her, the court heard.

The prosecutor said: "She (the alleged victim) immediately shouted: 'No!'

"She was shocked. The whole incident was completely unexpected.

The alleged victim said he was "very animated, excited and clearly enjoying himself".

She said Elphicke chased her around the home and tried to smack her bottom.

The jury was told the alleged victim "felt horrified by the entire situation".

She was said to have telephoned a friend about what had happened, with the incident being described by the friend as sounding "like a sketch from The Benny Hill Show".

The woman was also said to have phoned her brother after the incident, who described her as sounding "distressed, and almost hysterical".

In 2016, a second woman said she found herself in Elphicke's company sharing a bottle of champagne in Westminster when he allegedly assaulted her.

The young woman later said: "He fully came at me, pulled his body towards me.

"He had his mouth open, continually trying to kiss me.

The prosecutor said the woman "clearly rejected" Elphicke, told him he was married, and that there was a large age gap.

The parliamentary worker is alleged to have reported the incident to Anne Milton MP, the Conservative deputy chief whip, in 2016, before contacting police the following year.

The court heard Elphicke was called in to speak to Ms Milton, but "completely denied" anything that the woman had alleged against him – sexual assaults or any other behaviour.

Ms Marshall said: "It appears Charlie Elphicke was oblivious she didn't want anything to do with him.

"Charlie Elphicke is treating this as all one big joke.

"He's using that 'I'm so naughty" approach to get away with his behaviour."

Elphicke was elected MP for Dover in 2010 and held the seat until standing down at the general election in December 2019.

He was accompanied to court by Mrs Elphicke, his successor as Dover MP.