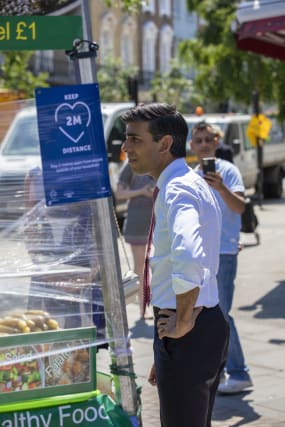 Chancellor Rishi Sunak is being urged to unveil a cash injection worth £200 billion in order to help the economy recover after the coronavirus storm.

Mr Sunak is due to make a statement in the House of Commons on Wednesday to unveil his plan to create jobs, upgrade buildings and protect the environment as part of efforts to rebuild the economy after Covid-19.

The Resolution Foundation think tank is urging the Cabinet minister to further loosen the purse strings, having already announced a string of bailouts and wage subsidy and emergency loan schemes since the outbreak started, and announce a fiscal package worth 10% of GDP.

It said such large scale support is required to turnaround what it claims could be the biggest shrinking of Britain’s economy in a century, with the foundation claiming a fall of 9.3% is likely.

And with the stimulus tools utilised by the last Labour government during the global economic crash, including cutting interest rates by 5%, not available to the Tory administration, the think tank is urging the Treasury to splurge in order to avert long-term job losses and revive the country’s fortunes.

James Smith, research director at the Resolution Foundation, said: “The Covid-induced economic crisis is like no other crisis we’ve seen.

“And with interest rates already at record lows, the Chancellor will need to take the lead in delivering an ambitious policy response to secure Britain’s economic recovery.

“The measures the Chancellor announces in his mini-Budget tomorrow need to be big enough to reflect the size of the crisis we face, targeted at the sectors that need the most support, and flexible enough to cope with the uncertainties that lie ahead.

“A £200 billion fiscal stimulus should therefore focus on protecting jobs and supporting spending in hard-hit sectors of the economy, and reflect the fact that low-income households have found it far hardest to cope.”

The think tank’s ideas for shoring up jobs is laid out in its report, Easing Does It, which will be published on Tuesday.

The report finds that, until a vaccine is available, the UK’s “new normal” for economic capacity could be 5% lower than pre-pandemic, suggesting a “big and long-lasting” economic hit.

The foundation recommends that a stimulus package, delivered over two years, should include a £17 billion per year job support package which would see the furlough scheme extended and job guarantees for young people.

The report authors said vouchers worth £500 per adult and £250 per child could be handed out to be spent in hard-hit sectors of the economy, such as face-to-face retail, hospitality and leisure.

Universal Credit should also be boosted by £10 billion to support low-income families, according to the report.

Meanwhile, analysis from the Centre for Progressive Policy (CPP) has suggested that urgent intervention is required to prevent 1.2 million people from falling into long-term unemployment when furlough ends in October.

The think tank is calling for a “turbocharged” right to retrain scheme, along with pitching for the state to pay 50% of wages for all young apprentices.

Andy Norman, research analyst at CPP said: “This isn’t just about fixing the failures and under funding of skills policy over the last 30 years, it’s about offering shop assistants, waiters and waitresses, and airline workers a realistic route to re-employment now.”

Trump escorted from briefing after shooting near White House