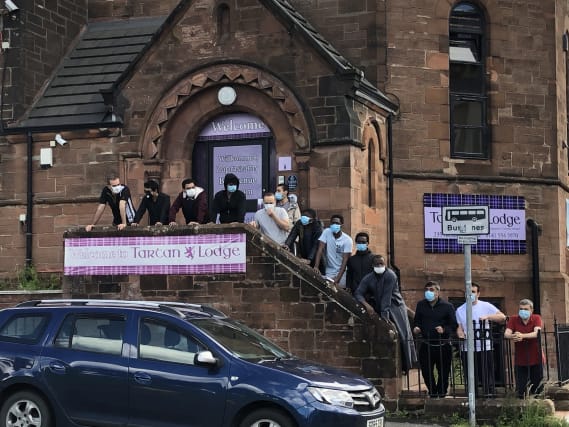 A humanitarian crisis is developing in Glasgow, with asylum seekers left malnourished in cheap hostels, a charity has warned.

Positive Action In Housing (PAIH) said many have been served with food “not fit for human consumption” and some have been placed in accommodation blighted with bed bugs.

The charity has rallied around refugees in the city after Badreddin Abadlla Adam’s attack at the Park Inn Hotel in West George Street.

The 28-year-old from Sudan was shot dead by officers after six people – including 42-year-old police constable David Whyte – were injured in the incident on June 26.

Asylum seekers were being housed at the hotel at the time and campaign groups have criticised the Mears Group, which has been subcontracted by the Home Office to carry out this process amid the coronavirus pandemic.

People being housed at the Tartan Lodge hotel in Glasgow described conditions there at a press conference outside the building on Monday.

They claimed they had initially been locked in but managed to get out to speak to the press.

Mohamed, an asylum seeker from Sienna Leone, said: “They told us don’t talk to the press.”

He added: “They have not gone to my room to clean it for the past two months, they have not cleaned the room.”

Chisom, from Nigeria, showed a plastic container of carrot and pea stew he said he was given for dinner on Sunday.

He said: “I’m happy to stay a lot of times not eating.  They knock my room, they give me food, I ask them what is this. I give it back to them.

“There is no option, I don’t have money to buy, if I had money I would have chosen to buy what I want but a lot of times I choose to stay hungry.”

Robina Qureshi, PAIH director, said Mears Group has picked up a £1 billion, 10-year asylum housing contract and accused it of “warehousing for profit”.

She said: “Those seeking asylum are terrified that because Mears and Home Office are aligned that by speaking out their case will be affected and they face being returned to death or persecution, they are terrified of not signing lease agreements in the hotels in case they are made destitute.

She added: “There is a humanitarian crisis going on in this city, where there are 5,000 asylum seekers.”

The charity said other asylum seekers have complained they have been moved at short notice by Mears into dirty, uninhabitable flats

PAIH is calling for a public investigation into the situation and for the Mears contract to be terminated by the Home Office.

A Home Office spokeswoman said: “These allegations are not true.

“Like everyone else in the country during the coronavirus outbreak, asylum seekers have been asked to stay where they are and to follow social distancing to help fight the spread, which has meant standing up temporary accommodation.

“When staying in hotel accommodation, all essential living needs – including three meals a day, healthcare, WiFi and TV – are met, which is all paid for by the taxpayer and there is no cost to the individual.

“For anyone with any issues, there is a 24-hour hotline available for support and it is fundamentally untrue to suggest that they are threatened with detention or deportation if they complain.”