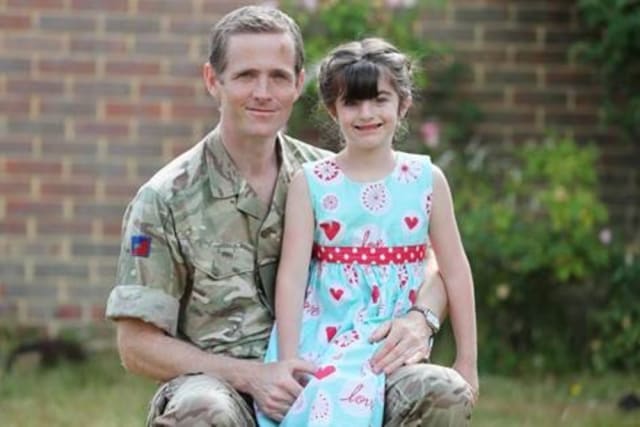 An army major is walking the length of the UK barefoot to fund treatment for his eight-year-old daughter, who has a rare disease.

On Monday, Major Christopher Brannigan will begin his walk without shoes from Cornwall to Edinburgh via Downing Street while carrying 25kg kit to raise awareness of those affected by rare diseases.

His daughter Hasti needs treatment for Cornelia de Lange syndrome (CdLS), to ensure she does not end up wheelchair-bound, mute, affected by seizures and requiring round-the-clock care.

The journey from Land’s End to Edinburgh will attempt to procure research for the first ever gene therapy treatment for CdLS and highlight the plight of all those affected by similar conditions.

Genetic Alliance UK said patients with rare diseases, defined as affecting fewer than one in 2,000 people according to the European Commission, are among the most vulnerable to Covid-19 as well as being hard hit by the measures put in place to contain and deal with the pandemic.

“I have been astonished over the last eight years how little, if at all, rare diseases feature in medical training, how low general awareness is, and how underfunded rare disease care and research are. This needs to change, particularly given Covid.

“I will do everything it takes to improve Hasti’s chances and support the millions of others who share my family’s experiences and aspirations. Children who suffer from rare diseases don’t deserve to be neglected and forgotten.”

He also plans to launch a parliamentary e-petition and deliver a letter to Downing Street on July 21, where he will meet with Jayne Spink, the chief executive of Genetic Alliance UK.