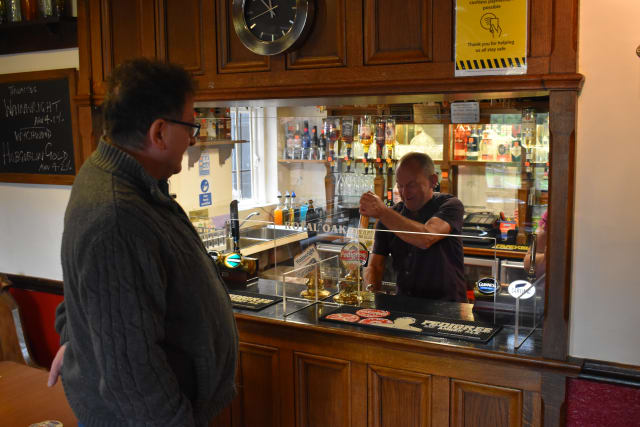 The national chairman of the Campaign for Real Ale (Camra) said feedback from branches suggested up to half of pubs have not reopened on so-called Super Saturday.

Speaking after raising a pint of Marston’s Pedigree to mark the end of England’s 105-day pub shutdown, Camra’s Nik Antona said many licensees had done a fantastic job to manage to reopen in the face of insufficient notice from the Government.

After being greeted by Steve and Katy Boulter, who run the Royal Oak in Barton-under-Needwood in Staffordshire, Mr Antona said one-way systems, protective screens and other measures had made pubs safe.

But he told the PA Media news agency: “I think it’s going to be difficult for pubs.

“They are opening up under uncertain circumstances. They don’t know if they’re going to get their customers back.

“The Government have not really been helpful with their guidance, leaving it to the last minute in a lot of cases.

“What you are finding is, some of the pubs haven’t even bothered opening today – they want to see what’s going to happen.

“Across the country I’ve seen figures of up to 50% of pubs actually not opening today.”

Urging drinkers to vote with their feet and support local bars and pubs, while maintaining safety through social distancing, Mr Antona added: “It’s important that people come back to the pub – but do it safely.

“As you see from this pub, they have had to put in place a lot of new rules and regulations.

“What I am asking customers, Camra members, drinkers, is: listen to what you are told and respect the staff.

“If they ask you to do something, do it straight away.

“Make sure that you don’t mix outside of your social bubbles or outside of the groups you have come with – and respect the lay-out and the way people have set their pubs up.

“It is a safe environment. Pubs have gone to a great deal of effort. It is safe, so please come back to the pub and support your local.”

Sitting near a Perspex screen which had been used to divide up a large table beside the Royal Oak’s main bar area, Mr Antona said pubs had not been given enough notice of the date on which they were allowed to reopen.

“These pubs have had to bend over backwards to get things done in time,” he said.

“That’s why quite a few pubs haven’t opened – because they just haven’t had an opportunity to do everything they needed to do in time.

“I think the Government could have done better – they could have given more notice.

“They left it to the very last minute to help these pubs and the ones that have opened today have done a fantastic job to get there.”