NHS celebrates 72nd anniversary after most challenging year in history 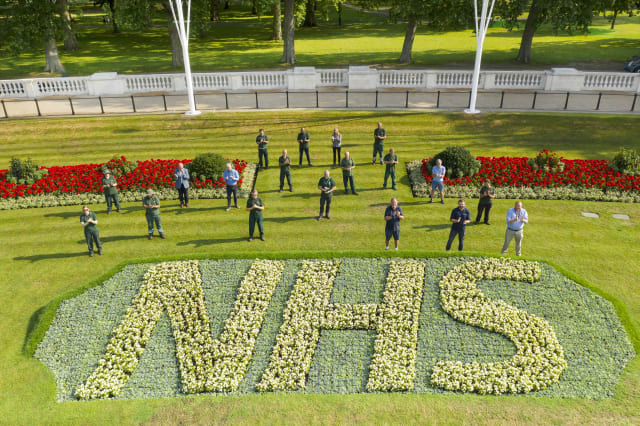 The NHS is celebrating its 72nd anniversary on Sunday after facing the most challenging year in its history.

The occasion will be marked by a round of applause at 5pm to commemorate the efforts of all key workers and volunteers during the pandemic, which will be broadcast live.

A Spitfire with the message “Thank U NHS” painted on its underside will also fly over several NHS hospitals in the east of the country, finishing over Cambridge.

More than 100,000 hospital inpatients have been treated for Covid-19 in the UK, including Prime Minister Boris Johnson, along with many more who suffered with the virus at home.

Members of the armed forces constructed eight NHS Nightingale hospitals within weeks, which are all now being held on standby.

The Government’s latest figures showed that 44,131 people have died after testing positive for coronavirus in the UK as of 5pm on Thursday, and a candlelit vigil was also held on Saturday night to remember them.

NHS chief executive Sir Simon Stevens said hospital workers have only been able to pull the country through the pandemic thanks to a “national mobilisation” of all key workers, from care assistants and supermarket shelf-stackers to transport workers.

Speaking to the PA news agency outside St Thomas’ Hospital in London, he said the NHS’s anniversary is an opportunity to thank these key workers.

He said: “I think for NHS there will be a sense of relief, having coming through this huge first spike of coronavirus patients, but also people have been working incredibly hard.

“So there’s a need to take a moment to reflect and recharge the batteries while at the same time doing all the other brilliant things that the health service does.

“This is a huge national effort and the NHS is hugely grateful for all the support it has received from all of the rest of the country.”

Sir Simon warned the NHS could have another “enormous job on our hands” if a second virus spike sweeps the UK at the same time as seasonal flu, and urged people to continue observing social distancing.

He said: “Going into autumn and winter, we are going to have to continue to be vigilant about the possible resurgence of coronavirus.

“Until such time as there is a vaccine, we know that it will be lurking across the world.”

Katie Scott, an NHS speech and language therapist – who was deployed as an emergency Covid-19 nurse for five weeks at the height of the pandemic, turned 24 on the same day as the NHS’s birthday.

While celebrating by having a socially-distanced picnic with friends at a London park the day before, she said she felt proud to work for the NHS.

Miss Scott, from Burley-in-Wharfedale in Yorkshire, said: “We are lucky to have the NHS and often take it for granted.

“The working culture is both supportive and really puts patients first.

“This combination makes me feel proud to work for the NHS, particularly when I see first hand us making a difference to patients lives and supporting those who need our help.”

Father of three James Jackson, a childminder by day and Sainsbury’s assistant by night, has been volunteering as an NHS Volunteer Responder since the start of the pandemic.

Mr Jackson, from Blackley in Manchester, said he signed up within 10 minutes of hearing about the NHS’s plea for helpers.

Volunteers have carried out 450,000 tasks since the start of the pandemic according to The Royal Voluntary Service, and the 47-year-old said he has become a friend for vulnerable people.

He said: “I have spoken with some callers on numerous occasions. One woman is shielding with her husband, who has lots of health conditions.

“She was terribly worried, when I first rang her up, she said: ‘what am I going to do, I’ve got no one to talk to, I’m looking after him and I’ve got so much pressure on me… who is going to look after me?’

“I told her not to worry because I’m here for her, and she got tearful on the phone, and said ‘what would we do without people like you?'”

He added: “You are that bridge for people to speak to them and let them know they are not alone, so it’s been really good.”

Mr Jackson said his three children – aged two, three and 10 – have decorated their windows with NHS rainbows and he will be joining the anniversary applause.