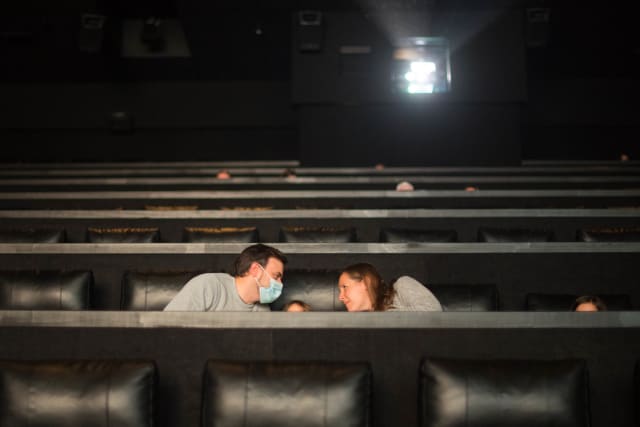 Cinemas have reopened their doors to customers following months of closure.

Film goers are being welcomed into venues with reduced capacities and are being encouraged to follow measures such as wearing masks, paying by contactless transactions and using hand-sanitising stations on arrival and exit.

However while some cinemas resumed trading on Saturday, a large number have remained closed despite restrictions being lifted.

At the Showcase cinema in the Bluewater shopping centre in Dartford, Kent, staff are all wearing masks and being subject to mandatory temperature checks on arrival at work.

Perspex screens have been put up around tills and stations where food is served, and one-way systems around the venue guide customer’s movement in an effort to stop them coming into close contact with each other.

A dearth of new film releases means the cinema is showing old films including Harry Potter And The Philosopher’s Stone and Back To The Future.

A steady stream of people were coming into the venue on Saturday and very few were wearing masks.

Andrea Necchi, a 31-year-old project manager for protection at a construction company, said it was a “strange” experience, adding that his children had their temperature taken on the way in.

“It’s all a bit eerie, but apart from that it is good to be back,” he said.

Michelle Major, 57, who is a dog carer, said she is glad that normality is slowly returning as it has been difficult to explain the lockdown restrictions to her son, who is disabled and autistic.

“It has been hard for him to understand what is happening,” she said, adding that he was “super excited” to be going to the cinema.

She said she has been “impressed” by the measures put in place by the cinema.

“I think it is very safe, it is not the staff or the cinema who will mess things up, it is the customers,” she said.

Molly Ladbrook-Hutt, a 36-year-old director of media, said it “felt great to be somewhere different”.

She added: “I’m really impressed so far with the measures, everything has been really clearly explained and it has been a lot easier than expected.”

While cinemas are allowed to resume trading on Saturday, a large number of venues have not immediately done so.

Cinema chain Cineworld pushed back its reopening date to July 31, blaming the delay on changes to planned film release dates.

Odeon has opened 10 of its cinemas on Saturday before opening a further 88 by the end of the month.

Vue and Picturehouse are also not opening this weekend.