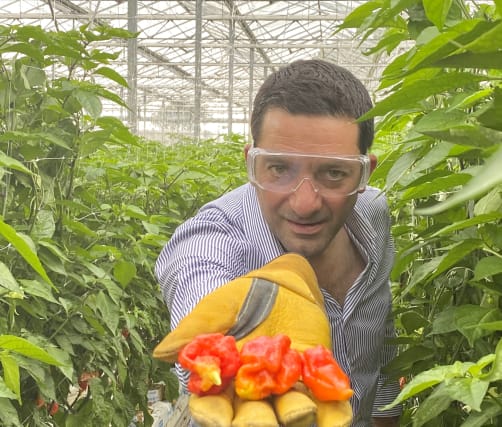 Tesco has responded to soaring lockdown demand for super-strength chillies – by re-adding three of the world’s hottest peppers to its range.

The supermarket giant has seen sales of Scotch Bonnet peppers, a favourite in Caribbean recipes, rocket by around 170 per cent since restaurants closed their doors in March.

Shoppers at Tesco’s UK stores will be able to snap up even fierier varieties Carolina Reaper, Komodo Dragon and Armageddon from this weekend.

All three are being grown by Bedfordshire-based chilli farmer Salvatore Genovese, who supplies UK retailers with a million peppers a week.

But Tesco is advising home cooks using the new trio of “super hot” varieties to take extreme care when preparing and eating them.

The Carolina Reaper has been judged the hottest pepper in the world, measuring around 1.5 million units on the Scoville chilli scale – hundreds of times hotter than a jalapeno pepper.

Tesco’s chilli pepper buyer Emily Hampson said: “These super-strong varieties are not for beginners and we advise that only experts who know what they are doing should try them.”

Ms Hampson added: “Despite their ferocious heat, they are becoming more and more popular with UK shoppers.

“If you have some basic kitchen skills and use just a smidgen with say, some cream, then you can temper the heat to create a vibrant and delicious sauce out of them.”

Mr Genovese, whose family has farmed for generations in the Blunham area of Bedfordshire, turned to commercial chilli growing after graduating from agricultural college.

He now receives orders from all over the world for chillies raised between spring and Christmas in glasshouses without artificial light.

Mr Genovese, whose Armageddon variety is believed to be the hottest originally British-bred chilli, commented: “When I started growing them no one believed that the UK would have such a great appetite for chilli peppers, particularly the really super-hot ones.

“But we have a growing chilli culture and you only have to look online to see all the UK-based chilli sauce businesses that have sprung up in recent years.

“Each of these three varieties on sale at Tesco have subtle differences such as the fruitiness or the immediacy of its strength on the tongue.”

The chillies will cost £1 a packet and contain up to three peppers, depending on the size.