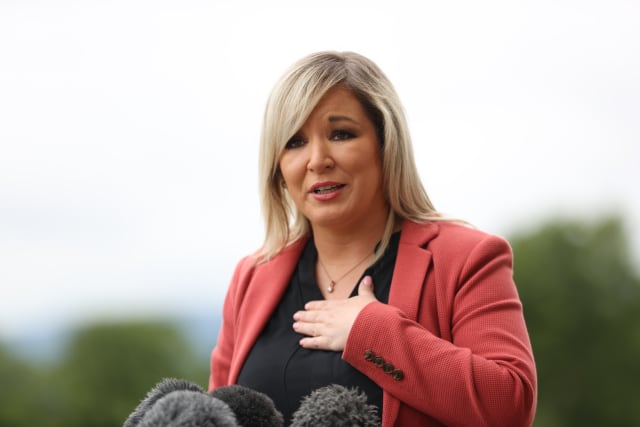 Michelle O’Neill has said she will never apologise for attending the funeral of IRA veteran Bobby Storey.

Stormont’s deputy first minister stood by her decision to attend but did say sorry to any families bereaved during lockdown for the hurt caused by the funeral controversy.

Ms O’Neill is facing calls from the other four parties in the five-party Executive at Stormont to stand down from her role as joint head of government pending police and Assembly standards investigations into the scenes in west Belfast when hundreds lined the streets on Tuesday.

She and party colleagues have been accused of flouting the Covid-19 regulations and guidance they helped to set.

On Friday, Ms O’Neill again insisted she acted within the rules in respect of all the things that were within her control, such as the size of the cortege and the numbers attending inside St Agnes’ Church.

“I will never apologise for attending the funeral of my friend,” she added.

But Ms O’Neill acknowledged some families had been left upset.

“I am also concerned that those grieving families are experiencing more hurt over recent days,” she said.

She added: “I would never set out to hurt any family or compound their grief at such a sad time.

The leaders of the five main Executive parties at Stormont met on Friday morning in an effort to resolve the row.

A statement from Ms O’Neill apologising for the hurt caused to families was issued while the meeting was taking place inside Parliament Buildings.

Ulster Unionist leader Steve Aiken and SDLP leader Colum Eastwood, who both participated in what have been described as “robust” exchanges, said Ms O’Neill’s remarks did not go far enough.

They rejected her claim that she stuck to the rules, insisting there were clear breaches.

DUP leader Arlene Foster is due to respond to Ms O’Neill’s statement later on Friday.

Ms O’Neill and Sinn Fein party president Mary Lou McDonald both said sorry to bereaved families on Friday morning. But both have stood by their decision to attend.

Under Stormont regulations and guidance still displayed on executive websites this week, friends of a deceased person should only attend the funeral if none of the bereaved family members are attending.

While guidance around general church services was updated this week to allow congregations to return, with numbers dependent on the size of the church, there is dispute on whether this applied to funerals.

Some churches have insisted they were advised the guidance did not apply to funerals when it came into force on Monday.

The Diocese of Down and Connor, which has responsibility for St Agnes’ church where the service took place, said its policy on Tuesday remained a limit of 10 people.

At a Stormont press conference on Friday afternoon, Ms O’Neill suggested there had been a “lack of understanding” on behalf of the clergy.

“So we had a very clear and robust conversation with the church leaders around the fact that they can open for requiem mass from Monday, and it was for them to decide the numbers that they could take into the church,” she said.

Outdoor gatherings are currently restricted to 30 people in Northern Ireland.

Ms O’Neill has insisted the cortege at the funeral complied with that rule and the numbers who lined the streets to watch it pass were outside the control of organisers.

Asked if she believed her statement would resolve the political row over the funeral, Ms O’Neill said: “I hope that families get some succour from what I’ve had to say today.

“I hope the Storey family gets space now to be able to grieve for the loss of Bobby.

“It’s for others to say where they want to go next, but I’m determined, I’m here to make it work.”

She added: “I am determined to make this Executive and this Assembly work.

“I am determined to work with all the political parties. That’s my resolve, that’s why I came back into these institutions, that’s why I fought for three years to get it back up and running again.”

Earlier, party president Mrs McDonald said she wanted to apologise to anyone who was hurt by the sight of crowds gathering.

“I am acutely conscious of everyone who has lost a loved one and buried them in the most difficult and heart-breaking and lonely of circumstances at the heart of the pandemic,” she told Newstalk.

“The very fact that people could not have church services, if that is what they wished, or even enter cemeteries or crematoriums, was incredibly, incredibly hard.

“Can I also say that I do understand that looking at the images of very busy pathways in west Belfast and taking all of that in obviously has jolted and has caused some hurt among some of those families, and for that I am very sorry.”