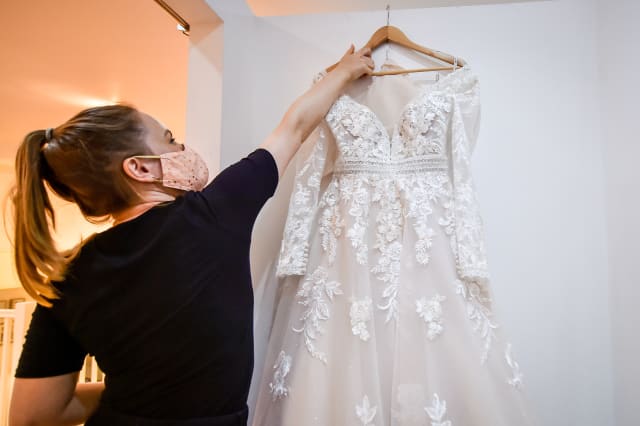 More than 73,000 weddings and civil partnerships in England have been postponed as a result of the coronavirus pandemic, according to new estimates.

Couples in England will be able to tie the knot for the first time in more than three months this weekend, but new data from the Office for National Statistics (ONS) suggests that around 73,600 ceremonies have been postponed since coronavirus lockdown measures were implemented in March.

The data suggests that approximately 73,400 marriages in England will have been put on hold, including around 71,600 opposite-sex weddings and some 1,800 same-sex.

The figure was calculated using the average number of weddings that took place between March 23 and July 3 in 2014 to 2017.

The rest of the postponements were civil partnerships, with the number based on the average number of ceremonies conducted between March 23 and July 3 in 2015 to 2018.

The numbers do not take into account ceremonies that were planned to take place abroad.

Ceremonies can be held again from July 4 as part of wide-ranging changes to the lockdown rules in England, but the guest list will have to be capped at 30 people.

Despite lockdown slowly easing, people around the UK are increasingly worried about the impact of Covid-19, in particular how they will pay the bills.

Since the pandemic, 11% of adults say they have found it difficult or very difficult to pay household bills, up from 5% before coronavirus.

The ONS opinion and lifestyle survey also indicated that just under three in 10 adults (28%) questioned between June 25 and June 28 would not be able to afford to pay an unexpected but necessary bill of £850, and more than one in 10 (11%) have had to borrow more money or use more credit than usual since the pandemic.

As well as financial worries, an increasing number of Britons were concerned about the impact Covid-19 was having on their life right now, with 69% saying they were very or somewhat worried, up from 64% the week before.

Although, there has been a decrease in the number of people reporting problems that could be linked to lockdown.

According to the ONS, 45% of adults reported they felt bored, compared with 60% last week, while 34% said they were spending too much time alone, down from 40% last week.