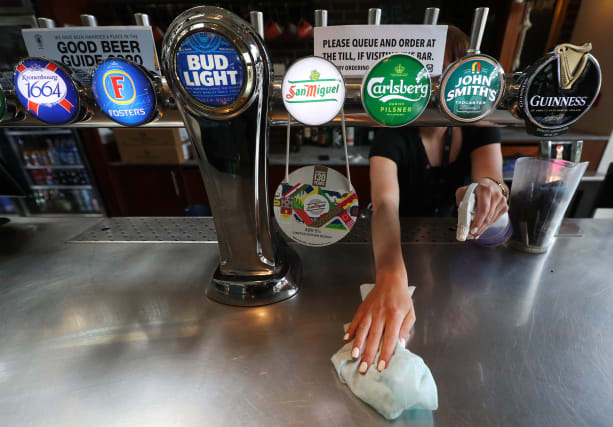 Pubs could be making financial losses “for some time” with up to 18,000 at risk of closure by the end of the year, an industry boss has warned.

Customers will be allowed to drink inside bars and pubs for the first time in three months as they reopen on Saturday under the easing of lockdown measures in England.

But the British Beer and Pub Association’s (BBPA) chief executive Emma McClarkin said the industry will need further financial support from the Government to survive.

She told the PA news agency: “We are really excited to be having the chance to reopen on Saturday, but please don’t think that the sector is therefore trading at normal levels and will be able to sustain itself.

“It won’t be making a profit for some time.

“We are hoping that 80% of pubs will reopen, but if 10% of them are profitable, that will be a surprise to us. Because the majority are expecting to loss-make or break-even.”

Ms McClarkin said it could take the industry “more than a year” to rebuild consumer confidence and return to pre-coronavirus trading levels, with pub owners expecting “much lower” footfall initially.

Due to social distancing measures – which have been reduced to one metre-plus – some smaller premises could be limited to having just eight customers inside, she added.

“This weekend is only the first step in a long road to recovery,” Ms McClarkin said.

“We could still lose over 40% of pubs by the end of the year if we don’t get reasonable trade in from July 4.”

Business rate reform and reductions to beer duty – the tax on producing and selling beer – were needed to help the industry survive, Ms McClarkin said.

Further financial support from the Government would also be required if pubs and breweries were forced to close due to future local lockdowns, she said.

About 150 BBPA pubs in Leicester will not be reopening on Saturday as lockdown measures remain in place following a spike in Covid-19 cases in the city.

“This is a fragile sector that is just about surviving,” Ms McClarkin added.

“Additional lockdowns and additional closures on top of that could be the death knell.”

The new regulations allowing for the reopening of pubs come into force at 6am on Saturday, the Department for Business, Energy and Industrial Strategy said, however venues will still need to abide by their own licensing regulations about when they can open to customers.

Meanwhile, Brewdog said three of its bars – in Shoreditch, Manchester and Newcastle – will reopen at one minute past midnight on July 4.

The company said the bars will only be open to a limited number of ticket holders as part of a private event.

Under the latest Government guidance, pub staff will be required to wear face coverings and take other precautions such as providing hand sanitiser and putting one-way systems in place to keep customers safe.