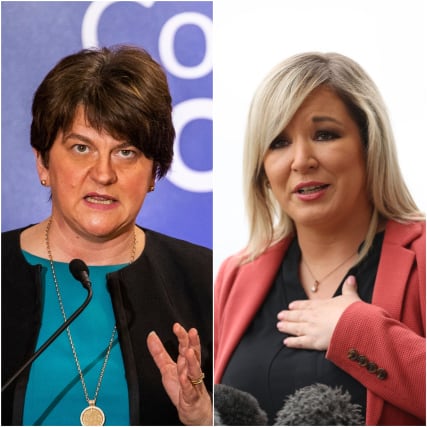 Trust between members of the Stormont coalition and Deputy First Minister Michelle O’Neill’s credibility in delivering Covid-19 health messaging have been damaged by the controversy over large crowds at Bobby Storey’s funeral, the DUP leader said.

Ms O’Neill has stood by her decision to go to this week’s west Belfast service for the senior republican but did say sorry to families bereaved during lockdown for any hurt caused by scenes of hundreds of people lining the route.

Mrs Foster said: “Regrettably, the role of the Deputy First Minister in causing that hurt has not been acknowledged today.

“I think it falls short of that.

“I regret that that is the case.”

Ms O’Neill is facing calls from the other four parties in the five-party Executive at Stormont to stand down from her role as joint head of government pending police and Assembly standards investigations into the scenes on Tuesday.

She and party colleagues have been accused of flouting the Covid-19 regulations and guidance they helped to set.

Mr Storey was a former IRA figure who supported Sinn Fein’s leadership during the peace process.

Mrs Foster said she would be speaking further to other party leaders to try to address the controversy.

She added: “It is important that we try and rebuild that trust that has been lost.

“Unfortunately, the credibility of that messaging has been badly damaged over this past week.”

Ms O’Neill insisted she acted within the rules in respect of all the things that were within her control, such as the size of the cortege and the numbers attending inside St Agnes’ Church.

“I will never apologise for attending the funeral of my friend,” she added.

The Sinn Fein vice-president acknowledged some families had been left upset.

“I am also concerned that those grieving families are experiencing more hurt over recent days,” she said.

She added: “I would never set out to hurt any family or compound their grief at such a sad time.

The leaders of the five main Executive parties at Stormont met on Friday morning in an effort to resolve the row.