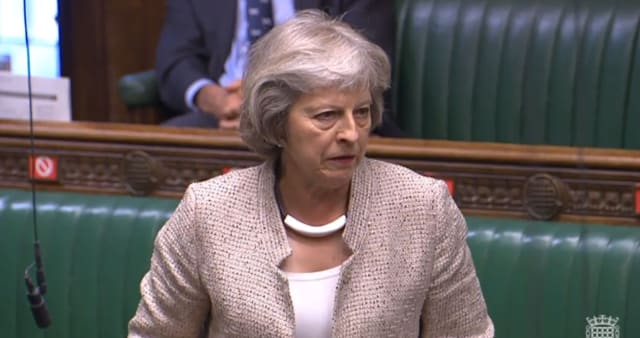 Theresa May has urged employers to support victims of domestic abuse, as she warned that many days of work would be lost if people could not talk about what was happening to them.

The Conservative former prime minister told business leaders that there were important economic and social arguments for employers to show greater awareness of abuse.

In a speech to an online event hosted by the Employers’ Initiative on Domestic Abuse, Mrs May said: “(Employer involvement) is important from a social point of view, from the point of view of social justice and for the good of our society.

She said domestic abuse also had an impact on the employer and on employment.

“Because if an individual feels that they are supported within the workplace, if they are able to talk openly about what is happening to them, and get support in that, then their contribution in the workplace will be greater,” she said.

“There will be many days of employment lost, many days of work lost, by people who are suffering from domestic abuse but aren’t able to raise it within their employment environment.

Mrs May has long championed action on domestic abuse, and also spoke about the Domestic Abuse Bill which will return to the Commons to complete its remaining stages next week.

The legislation seeks to give better protection to those fleeing violence by placing a new legal duty on councils to provide secure homes for them and their children.

It would also introduce the first legal government definition of domestic abuse, which would include economic abuse and controlling and manipulative non-physical behaviour.