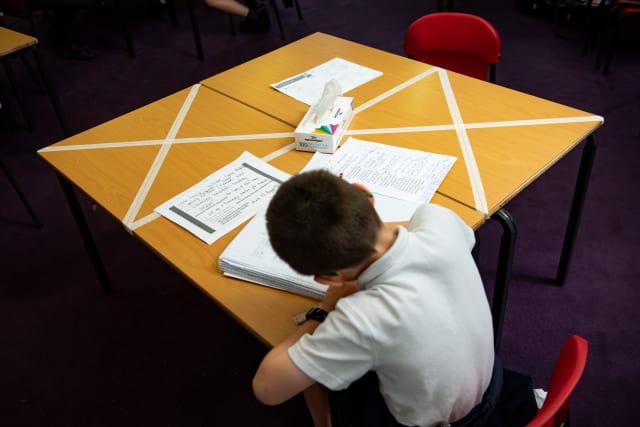 Schools in England have been told to keep children in class or year-sized “bubbles” and avoid creating “busy corridors” when all pupils return in September.

Government guidance – on how to get all children back after the summer break following up to six months at home – says older pupils should be encouraged to be kept away from other groups of students and staff.

The whole school, or all pupils in a year group, may have to self-isolate at home if schools have two or more confirmed coronavirus cases within a fortnight, the advice says.

But the guidance insists school closures “may not be necessary” if there are a number of confirmed cases of Covid-19 on site if schools implement the recommended controls.

Education Secretary Gavin Williamson announced the plans for getting all pupils back on the same day schools in Leicester closed as part of the city’s lockdown extension.

He also announced that limits on group sizes will be lifted in nurseries, childminders and early years providers in England from July 20 so more children can attend in the summer holidays.

The official guidance says mobile units can be dispatched to schools to test anyone who has been in contact with the child, or member of staff, who has tested positive.

Testing will focus on the person’s class, followed by their year group, then the whole school if necessary, the advice says.

Schools have been told to avoid large gatherings, such as assemblies, and to avoid singing in larger groups, such as school choirs and ensembles.

Schools have also been advised to stagger break times, start and finish times, and to consider using “walking buses” to reduce the use of public transport.

On Thursday, exams regulator Ofqual announced plans to delay the start of next year’s GCSE exams to allow more time for teaching amid the disruption.

More details are expected to be set out by Mr Williamson at a Downing Street press conference on Thursday – the first time one has been held since daily briefings were scrapped last week.

Meanwhile, schools in Leicester will be closed on Thursday and will not reopen until after the summer break.

A headteachers’ union has warned that it will be “enormously challenging” for schools to keep children apart in year-group-sized “bubbles” in September.

Geoff Barton, general secretary of the Association of School and College Leaders (ASCL), said: “The logistics of keeping apart many different ‘bubbles’ of children in a full school, including whole year groups comprising hundreds of pupils, is mind-boggling.

“School leaders will have to consider implementing staggered starts, finishes and lunchtimes, alongside transport to and from school, on an epic scale.”

He added: “However, we recognise that the options about how to bring all children back to school in the autumn are limited.”

Paul Whiteman, general secretary of school leaders’ union NAHT, added: “The situation seen in Leicester this week has demonstrated that this crisis is far from over, and there will be further disruption ahead.

“It is therefore essential that Government continues to monitor the data when it comes to school return and that it also has a credible Plan B in place should it be required.”

Figures released in Public Health England’s preliminary investigation into the Leicester outbreak – released on Wednesday evening – suggested a slight drop in the infection rate in the city from the week to June 20 to the seven days prior to June 27 – down from 140.2 to 135.7 per 100,000 people.

The data also suggests the overall infection rate in England fell over the same period from 10.7 to 6.7 per 100,000 – despite the easing of some lockdown restrictions.

Rates in Bradford, Barnsley and Rochdale declined more sharply over the same period. Officials in regions with high infection rates have said they are working hard not to follow Leicester into lockdown.

The report also suggested the majority of recently confirmed cases are in people aged 18 to 65 years – with the median age of those infected standing at 39 years. And 50.9% of the cases reported in June in the city were in women.

The wards of North Evington, Belgrave and Stoneygate had the highest number of cases reported between June 11 and 25.

But the report concluded evidence for the scale of the outbreak was limited and an increase in reported cases could be partly due to a rise in the availability of testing.

The Office for National Statistics will on Thursday provide new figures from the coronavirus infection survey for England, and the latest data on the NHS Test and Trace programme will also be published.

It comes as the economic challenges of the pandemic were laid bare by a continuing jobs bloodbath.

And Unite the union said its research revealed that almost 12,000 aerospace job losses have been announced in recent months at some of the UK’s biggest companies, including 1,700 by Airbus earlier this week.