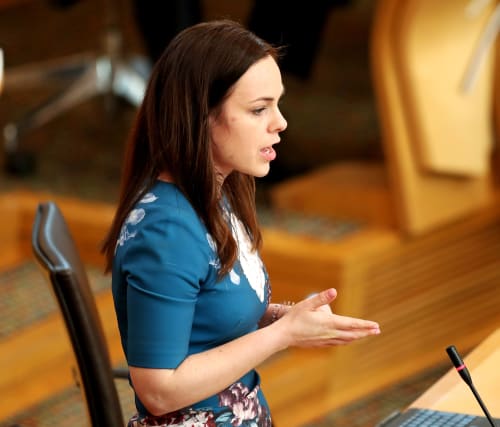 A Scottish Gaelic-speaking MSP has expressed dismay at a report suggesting the language might not survive beyond this decade.

The findings come in a new book entitled The Gaelic Crisis In The Vernacular Community: A Comprehensive Sociolinguistic Survey Of Scottish Gaelic.

The authors said Gaelic is “in crisis, and that within remaining vernacular communities of Scotland, the social use and transmission of Gaelic is at the point of collapse”.

In 2018, Skye, Lochaber and Badenoch MSP Kate Forbes became just the second female MSP and the first in the current Scottish Parliament chamber to deliver a speech in Gaelic during a plenary debate.

She said she wanted to demonstrate it was a living language, with MSPs using headsets to listen to a simultaneous translation.

Ms Forbes, the current Scottish Finance Secretary, told the PA news agency: “One of the communities under research, Staffin in Skye, is in my constituency. When I hold surgeries there, constituents choose to discuss matters in Gaelic with me.

“This isn’t just about preserving our heritage, understanding our culture or sentimentalising our ancestors’ memory – important as all of those are. This is about our future, and ensuring that this language is alive and in use for many years to come.

“I cannot overstate how critical the next few years will be. This research is sobering and stark and I think all of us should actively work to ensure these predictions don’t come true.

“Every organisation in the private and public sectors, particularly in the Highlands and islands, faces a choice of either facilitating or reversing the decline of Gaelic.

“If it is still going to be a vernacular language, rather than just the preserve of academia, then speakers should be allowed to take it into schools, the workplace, the local store and the place of worship.

“I take my responsibility as MSP for Gaelic-speaking communities very seriously – so should every other organisation, body and individual that lives or works in these communities.”

According to the last census in 2011, 57,375 people could speak Scots Gaelic, while 61% of people in the Outer Hebrides had some understanding of the language and 52% were able to speak it.

Discussing the new book, Professor Conchur O Giollagain, professor of Gaelic research at the University of the Highlands, said: “It is important that we are clear about the immense scale of the challenges involved in reversing the ongoing decline in the use of Gaelic in these areas.

“Our statistical evidence indicates that the Gaelic vernacular community is comprised of around 11,000 people, of which a majority are in the 50 years and over age category.

“The decline of the Gaelic community, as especially shown in the marginal practice of Gaelic in families and among teenagers, indicates that without a community-wide revival of Gaelic, the trend towards the loss of vernacular Gaelic will continue.

“We found a mismatch between current Gaelic policies and the level of crisis among the speaker group which must be addressed to face the urgency of the language loss in the islands.

“The primary focus of Gaelic policy should now be on relevant initiatives to avert the loss of vernacular Gaelic.”

However a language learning app also reported on Thursday that it has 393,000 active Gaelic learners from 418,000 course starts since its St Andrew’s Day launch last year.

Duolingo has more than 90 languages to learn on iOS, Android and its website, with Scottish Gaelic added in November 2019.

“When we launched the course we had more learners than native speakers in four days and since lockdown thousands of people all over the world have started learning.