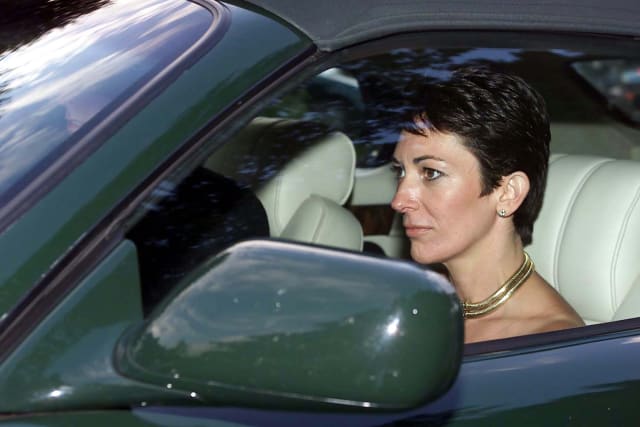 Ghislaine Maxwell has always lived among the global super rich and was no stranger to scandal long before she met Jeffrey Epstein.

The youngest of media baron Robert Maxwell's nine children, his death in 1991 exposed his multimillion-pound pension fund fraud at Mirror Group newspapers and plunged the family into crisis.

While her father's empire fell apart and two of her brothers were put under investigation for the fraud, Maxwell set up home in the US.

Here is a timeline of how she went from London socialite to alleged procuress for paedophile Jeffrey Epstein.

Born not far from Paris, Maxwell spent her childhood at her family's sprawling mansion of Headington Hill Hall in Oxfordshire.

She attended the exclusive Marlborough College – one of the most expensive public schools in the UK – before studying at Balliol College, Oxford.

After graduation, Maxwell held various posts in her father's companies and was a prominent figure on the London social scene.

Maxwell's father Robert was found dead, floating in the Atlantic Ocean off the coast of the Canary Islands having apparently fallen overboard from his luxury yacht the Lady Ghislaine.

With the business empire collapsing around her family's ears and Mirror Group employees facing the loss of their entire pension funds, Maxwell moved to New York to start a new life.

Maxwell met Epstein and is believed to have had a romantic relationship with him, although the exact nature of their attachment is unclear.

Some people known to the pair at the time described them as a couple, others considered her to be some form of assistant to Epstein, while he described her as his "best friend".

During this time, Maxwell allegedly introduced Epstein to the Duke of York, whom she was understood to have known through her upbringing at the heart of British high society.

Andrew maintains he did not meet Epstein until 1999.

Maxwell is said to have turned pimp for Epstein by identifying and grooming young girls.

Acting US Attorney for the Southern District of New York Audrey Strauss said: "(She) would be present for sex acts involving the minor victim and Epstein, Maxwell's presence as an adult woman helped put the victims at ease."

Andrew and Ghislaine Maxwell were seen on holiday with Epstein at Donald Trump's Mar-a-Lago Club in Palm Beach, Florida.

Epstein and Maxwell attended a party at Windsor Castle hosted by the Queen to mark Andrew's 40th birthday, the Princess Royal's 50th, the Queen Mother's 100th and Princess Margaret's 70th.

Virginia Roberts, also known as Virginia Giuffre, was groomed by Epstein between 2000 and 2002.

She claims she was forced to have sex with Andrew three times in 2001, with the first encounter allegedly taking place in Maxwell's London townhouse.

She does not go public with her allegations until 2010.

The duke has categorically denied he had any form of sexual contact or relationship with Ms Giuffre.

Police receive their first complaint about Epstein for sexual abuse of minors and an early FBI investigation identified around 40 victims.

Despite the growing mountain of evidence against him, US prosecutors bring just one charge of soliciting prostitution from an underage girl, for which he served just 13 months of an 18-month prison sentence.

Following Epstein's release from jail, the Duke of York is photographed with him in New York's Central Park.

Further footage emerges years later, reportedly shot on December 6 2010, showing him inside Epstein's Manhattan mansion, from where he is seen looking out from a large door of the property.

Maxwell's name begins to appear in a growing number of civil cases brought by Epstein's victims.

The first is filed by Virginia Roberts, who accuses Maxwell of recruiting her in 1999 when she was still under age and grooming her as a sex slave for Epstein.

Maxwell disappears from public life and her lawyers and those of the claimants say that she is "unreachable" and does not appear to have a permanent address.

Epstein is arrested at a New Jersey airport in July 2019 on sex trafficking charges and held at the Metropolitan Correctional Centre in New York.

The financier is found dead in his jail cell on August 10.

Maxwell maintains a low profile, and is rumoured to be staying at the home of a former partner in a small coastal town in Massachusetts.

Five days after Epstein's death photos emerge of Maxwell apparently dining in a fast food restaurant in Los Angeles, although the pictures are later exposed as fakes.

Maxwell's lawyers claim they do not know where she is or have permission to accept the papers in recent lawsuits naming her as a defendant.

Maxwell is arrested by the FBI in Bradford, New Hampshire.

FBI New York assistant director William Sweeney tells a press conference: "We have been discreetly keeping tabs on Maxwell's whereabouts as we work this investigation.

"More recently we learned she had slithered away to a gorgeous property in New Hampshire, continuing to live a life of privilege while her victims live with the trauma inflicted upon them years ago."