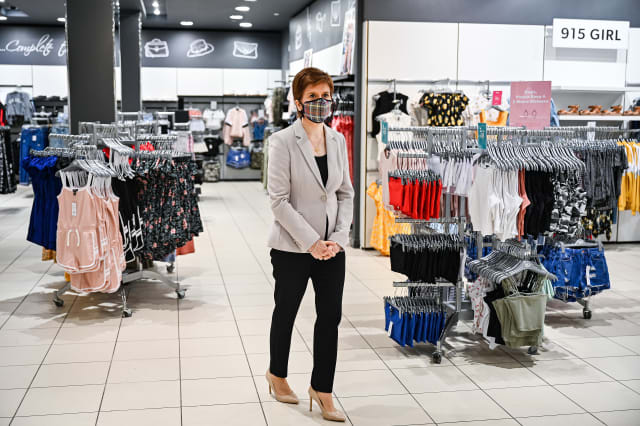 Wearing face coverings will become mandatory in shops in Scotland from the end of next week, First Minister Nicola Sturgeon has said.

During the Scottish Government’s daily coronavirus briefing, Ms Sturgeon also announced that the two-metre social distancing rule can be reduced in the hospitality and retail sectors and on public transport at that time.

Pubs, restaurants and shops will be allowed to adhere to a one-metre rule instead, with mitigation measures in place.

But the general rule in law will be that businesses must take reasonable measures to ensure two-metre distancing is maintained, she said.

The First Minister also said 2,487 patients have now died in Scotland after testing positive for coronavirus, up by one from 2,486 on Wednesday.

Announcing the new measures, Ms Sturgeon said the science on physical distancing has not changed and there is an increased risk of somewhere between two and 10-fold in reducing the measure to one metre.

But she said that as the number of infected individuals falls, there is less chance of coming into contact with someone who has the virus so absolute risk is lower.

She added the Government recognises the two-metre rule has benefits, but it also has “serious economic implications” which can impact on people’s health.

“For those reasons when we enter stage three of the route map, which I hope will be the end of next week, we will allow exemptions for specific sectors where agreed mitigations must be put in place,” she said.

Masks became mandatory north of the border on all public transport on June 22.

From July 15, Scotland is set to reopen indoor pubs, restaurants and hairdressers.

Ms Sturgeon said the Scottish Government has been considering the issue of face coverings “for some time now”.

She said: “I can confirm today that from the expected start of phase three, which is July 10 next week, wearing face coverings will also be mandatory in shops.”

Children under five will be exempt from this rule, she added, along with those with certain medical conditions.

But she said: “For everyone else, face coverings will be mandatory.

“This is not a decision we have taken lightly, it has taken us some time to reach this decision.

“But as we all start to interact more, it is vital we take all reasonable steps to reduce risk and we know that face coverings can help reduce the risk of transmission indoors.”