Cheetah cubs emerge from their den for the first time 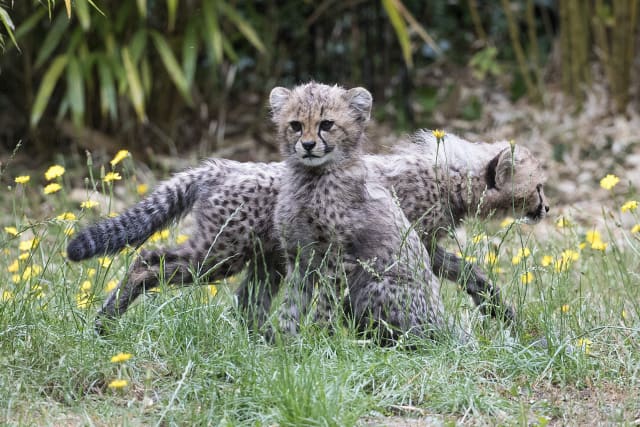 A litter of four cheetah cubs who were born during lockdown have emerged from their den to explore their outdoor enclosure for the first time.

The big cats were born at Colchester Zoo on April 15 while the Essex attraction was closed to the public.

Keepers named the male cub Colonel Tom in honour of 100-year-old veteran and NHS fundraiser Captain Sir Tom Moore, who was made an honorary colonel for his efforts.

The three female cubs are called Nova, Hope and Star, with a public vote selecting names beginning with the letters N, H and S in tribute to the National Health Service.

The zoo has hailed the arrival of the four cubs as “amazing news for conservation” which will help contribute to the survival of the species.

When the cubs are older they are likely to move to other zoos through breeding programmes.

The cheetah is the world’s fastest land mammal and can accelerate from 0 to 60 miles an hour in just three seconds.

In the wild, cheetah cubs are preyed on by lions, leopards, African hunting dogs and spotted hyenas.

They spend the first few weeks of their life hidden in a den while their mother is hunting, and have a mane of tufty hair which helps to camouflage them from predators.

Colchester Zoo reopened to the public on June 18 with a reduced capacity, staggered arrival times and a one-way system in place to allow two-metre social distancing.

Some indoor attractions remained closed, including the giraffe and elephant houses and the orangutan building.

These will reopen from Saturday as guidance is relaxed to allow social distancing of “one-metre plus”, with visitors to the zoo advised to wear a facemask while indoors.