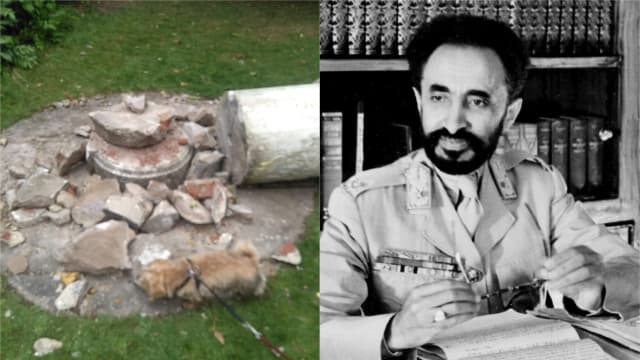 A statue of former Ethiopian leader Haile Selassie has been smashed in a park in London.

The incident in Cannizaro Park, which is being investigated by police, was carried out on Tuesday evening by a group of around 100 people, according to an eyewitness.

It appears to be linked to unrest in Ethiopia sparked after Hachalu Hundessa, a famous singer cherished by people of the country's Oromia region, was shot dead earlier this week.

Wimbledon resident Andrew Morris said he saw the mostly male group while out for a walk with his dog Archie.

"As soon as I got out of the car I heard all this noise and thought there must be some festival going on or an unauthorised rave or something," the 53-year-old told the PA news agency.

"I heard the statue being smashed up, but didn't actually see it happen.

"They weren't some rabid mob, they looked pretty calm... I didn't think they were in danger of attacking anyone.

"These other guys ripped a sign out of the ground and started smashing that to pieces – it didn't even say anything but obviously they were just in the mood."

Mr Morris said the group were carrying fliers that had Oromo slogans on.

After the group had left the park the police arrived and Mr Morris was questioned by an officer.

The Metropolitan Police said enquiries are ongoing and no arrests have yet been made after they were called to a report of criminal damage at 5.10pm on Tuesday.

Mr Morris said he did some research online when he got home and read about the death of Hundessa.

Hundessa was famous for singing about the rights of the Oromo people and had been a prominent voice in anti-government protests that led to a change in leadership in 2018, with Prime Minister Abiy Ahmed taking office.

"People are saying (the statue being removed) is racist but it's a domestic political thing," Mr Morris said.

"I don't condone what they did but I can see what their beef is – it's not just vandalism for the fun of it.

"Part of me thinks all the statue toppling is a little bit pointless as it's history, and yet for them, it might be quite cathartic.

"But it is a shame to lose that little piece of Wimbledon."