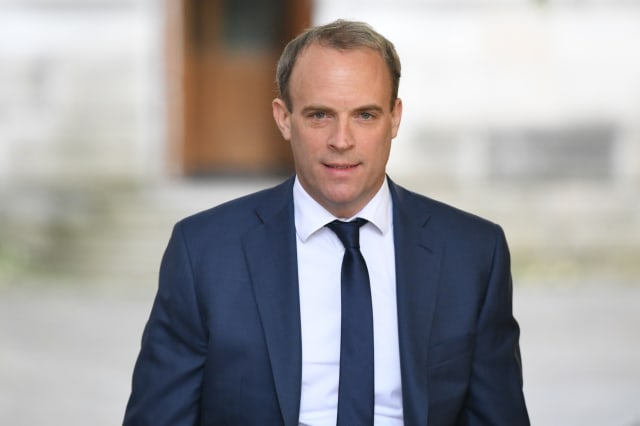 Foreign Secretary Dominic Raab has accused China of a “clear and serious violation” of a treaty forged with the UK by imposing national security legislation on Hong Kong.

The Cabinet member said the UK will “honour” its commitment to citizens of the former British colony, which could extend the right for nearly three million Hong Kongers to come to the UK.

Mr Raab on Wednesday said Beijing had breached the Joint Declaration signed between the UK and China to protect freedoms in the territory by enacting the controversial legislation.

His statement came after Hong Kong police made their first arrests under the law, including one person said to have displayed a sign with the Union Jack and calling for Hong Kong’s independence.

Taking effect on Tuesday night, the law makes activities deemed subversive or secessionist punishable by imprisonment. It is seen as targeting the anti-government demonstrations.

In a statement outside the Foreign Office, Mr Raab told reporters the UK had carefully assessed the legislation since its publication on Tuesday night.

“It constitutes a clear violation of the autonomy of Hong Kong and a direct threat to the freedoms of its people, and therefore I’m afraid to say it is a clear and serious violation of the Joint Declaration – the treaty between the United Kingdom and China,” he said.

Due to make a statement to MPs in the House of Commons later in the day, Mr Raab said he will “honour” the UK commitment to those with the British National (Overseas) nationality.