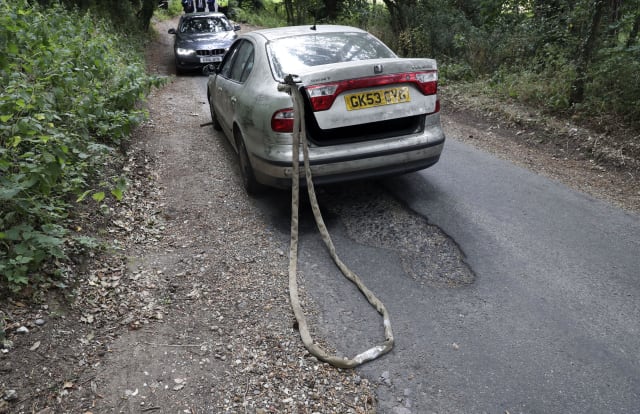 More than a dozen uniformed police officers stood silent guard as jurors visited the place where Pc Andrew Harper died in the line of duty.

Blue silk posies tied to street posts marked the area where the 28-year-old Thames Valley police officer fell after being dragged more than a mile behind a car on the night of August 15 last year.

A small circle of blue and white painted stones had been laid on the verge in tribute to the officer, with one saying “when your heart stopped beating a part of me died”.

Pc Harper had been trying to apprehend teenagers who had stolen a quad bike in Stanford Dingley, Berkshire, when he became entangled in a tow strap behind their Seat Toledo.

He was pulled along winding country roads for more than a mile at speeds of some 42mph before he became detached in Ufton Lane off the A4.

Pc Harper, who would have been knocked unconscious, had suffered horrific injuries and died at the scene.

The Seat driver, Henry Long, 19, and passengers Albert Bowers and Jessie Cole, both 18, from near Reading, are charged with his murder.

On Wednesday, a jury in their retrial retraced the route the thieves took, walking the final leg across the A4 to view the place where Pc Harper died.

The court convoy was flanked by police cars and more officers lined the curb of the busy A4, which was temporarily closed to allow the jury to cross.

Earlier, jurors had boarded a grey coach at the Old Bailey in central London and travelled to Berkshire for a first-hand view of key locations in the tragedy.

The 12 men and women were accompanied by barristers, the trial judge and members of the press for the trip held under strict social distancing rules.

The buses negotiated narrow country roads to get to the picturesque village of Stanford Dingley, snaking their way through high hedgerows and grassy verges dotted with wild summer flowers.

A few locals out walking dogs in the light drizzle were seen stopping to stare as the convoy went by.

The first stop was the Bull Inn, where the defendants were allegedly spotted before a first failed attempt to steal the quad bike.

Prosecutor Jonathan Polnay pointed out two CCTV cameras attached to the closed village pub, which had a Union flag flying on the front bearing the message Thank You NHS.

The jury went on to view the £10,000 red Honda quad bike parked in the drive outside its owner’s period property, as it had been on the night it was snatched.

They then spent half an hour examining the thieves’ battered silver Seat parked nose to nose with Pc Harper’s dark grey police car in a reconstruction of their “confrontation” in Admoor Lane.

The “endless loop” tow rope, which Pc Harper got caught in, had been re-attached to the rear of the Seat for the jury to see.

Mr Justice Edis told them: “The vehicles have been put in similar positions to the position they would have been in during part of the incident.”

After a lunch break, the jury slowly followed the route the Seat took, as it left a bloody trail of Pc Harper’s clothes and body matter.

Jurors stopped briefly to examine posts at the side of the road on Lambdens Hill before disembarking at the A4 crossing.

After examining the place where Pc Harper fell, the jury got back on the coach and returned to London.

The defendants have admitted conspiring to steal the quad bike but have denied Pc Harper’s murder.

Long has admitted manslaughter but denies intending to harm the officer.