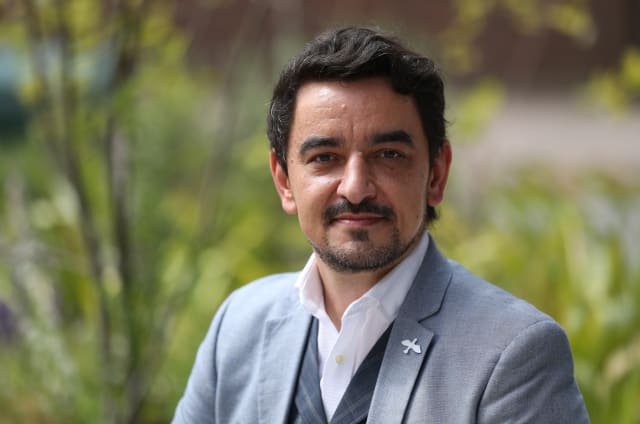 An emergency department nurse has described his “miraculous” recovery from Covid-19 as his hospital launches a campaign to wipe out transmission of the disease to enable services to return to normal.

Father-of-two Laszlo Penzes was given a 40% chance of survival after he became seriously ill with coronavirus.

He had begun to show symptoms on April 15 at the same time as his wife Timea, who also works as an emergency department nurse in Portsmouth, as well as their sons Patrik, 21, and Armin, 18.

He said: “It was the strangest experience to be a patient in my own workplace, but it was also comforting as I was being treated and cared for by my work family.”

The 45-year-old was placed on a ventilator but his condition deteriorated and on April 29, after being put in an induced coma, he was rushed to Guy’s and St Thomas’ Hospital in London.

He was then given extracorporeal membrane oxygenation (Ecmo) therapy with a machine that provides heart and respiratory support to patients, allowing his body to focus on fighting the infection.

Mr Penzes, from Southampton, said: “There was this blind spot between going into the deep sleep and waking up in London. I woke up wondering what had happened and put all these puzzle pieces back in place.

“The lead consultant called my wife and told her my chances of survival had dropped to 40%. He said if I did live, I would be expected to spend at least three weeks on this machine and then a long time afterwards in intensive care.”

But within eight days, on May 6, Mr Penzes had recovered enough to be disconnected from the machine, five days later he returned to Southampton, and after another nine days he was allowed home.

He said: “It has been counted as a miracle, in their words, as they don’t have a rational explanation as to how I recovered so quickly.”

When he was discharged from the hospital, colleagues lined the corridors to applaud his recovery and Mr Penzes said he was determined to stand up from his wheelchair to salute them to show his respect.

He said: “The emergency department family is quite a large team but they have all turned into best friends and blood family now.

“We were overwhelmed by how much love, kindness and support has been poured over us in the last few weeks.”

At the peak of the pandemic, UHS had 180 inpatients with Covid-19 with about 40 requiring intensive care.

Derek Sandeman, chief medical officer at UHS, said: “Nothing has changed, the pandemic is still here – the virus is still in our community and it remains infectious and dangerous. The numbers remain higher now than when it began.”

The campaign urges people to walk apart, wear a mask when they are not able to, and to continue to wash their hands as often as possible.

Mr Sandeman added: “Walk, wear, wash is a simple but vital message for everyone if we are to protect our hospital and make it a safe place for patients to come and staff to deliver the medical help they need.”