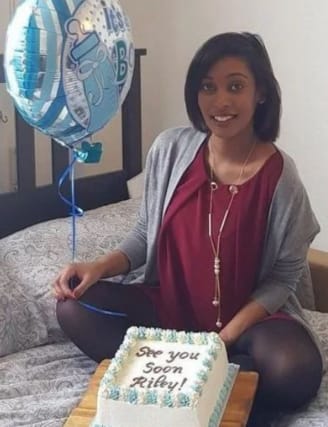 A “jealous” ex-boyfriend took a driving lesson hours after he killed his heavily pregnant partner as she slept in bed, a court heard.

Their son, Riley, was delivered by Caesarean section at the scene in Thornton Heath, south London, but died in hospital four days later.

The Old Bailey heard emergency services were called to Ms Fauvrelle’s family home shortly after 3.15am on June 29 when the victim’s sister, Melissa, heard screaming from within the property.

Around five hours later, suspect McKenzie – whose relationship with the victim ended in February – was having a driving lesson.

Prosecutor Duncan Penny QC said the driving instructor sent a text to McKenzie at 7am that morning asking if he was still available for the lesson, to which McKenzie replied: “All good.”

The court heard McKenzie was picked up by his driving instructor at 8.30am, whose behaviour was deemed by her to be “completely normal”.

In the wake of the attack, McKenzie pretended to have nothing to do with it, the court heard.

He went to the hospital where medical staff were trying to save the life of his child, “posing as a victim”, Mr Penny said.

The defendant allegedly lied to police and did not tell them that he had spent over an hour before the killing accessing and reading his ex-partner’s emails.

The prosecutor said McKenzie was “desperately jealous” that Ms Fauvrelle was seeing someone new and had “moved on”.

Earlier, Ms Fauvrelle’s mother Mary Patton described being awoken by screams on the night of the attack, thinking her daughter – 33 weeks pregnant at the time – was giving birth.

In her witness statement to police, she said: “I heard (daughter) Melissa screaming to call the police.

“I thought Kelly was having her baby.

“I saw Kelly had a pregnancy pillow round her neck. Blood was coming from her mouth. I could see she had been stabbed.”

The court heard Ms Patton ran into the garden and began screaming, where she collapsed.

Describing her daughter, Ms Patton said: “Kelly was a cheeky girl who liked teasing us.

“Everything for her was a joke, she never took things too seriously.”