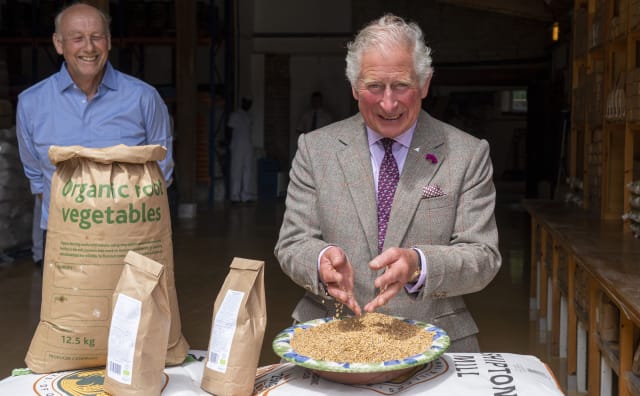 A mill which saw orders go through the roof as people turned to baking during lockdown has welcomed one of its clients – the Prince of Wales.

He toured Shipton Mill, near Tetbury in Gloucestershire, which holds Charles’s Royal Warrant and specialises in high quality traditional milling.

During the visit, Charles met members of the milling team and other staff before seeing the flour they have milled, including some from his own nearby Home Farm.

Speaking afterwards, mill owner John Lister said during the first few days of the Covid-19 lockdown, the mill saw a 25-fold increase in demand as people turned to baking while staying at home.

“To say it has been hectic would be an understatement,” Mr Lister said.

“The start of it was people couldn’t get the flour in the supermarkets and being at home decided to get baking.

“People have been really, really grateful and have been writing to us to thank us, which has been hugely encouraging. It’s a different kind of service but much more personal.

“In the end we got through it. Our staff have been fantastic and worked day and night to get the flour out.”

Mr Lister said the increased demand had off-set the temporary closure of around half their smaller artisan customers.

“Some of the bigger bakeries just got busier. We were fortunate we had a supply of packaging.”

Mr Lister and his family founded the business in 1980 and they produce a range of speciality flours and supply a growing band of artisan bakers throughout the UK.

They were involved in the first Duchy Original products in the early 1990s and the mill still produces the flours for the Duchy Originals biscuit range.

Mr Lister said the prince last visited the mill in 1992.

“We were really honoured to host the prince, not just for myself but for the people that have worked here 20 or 30 years,” he said.

“It’s a real privilege to have someone come and recognise what they have done.”