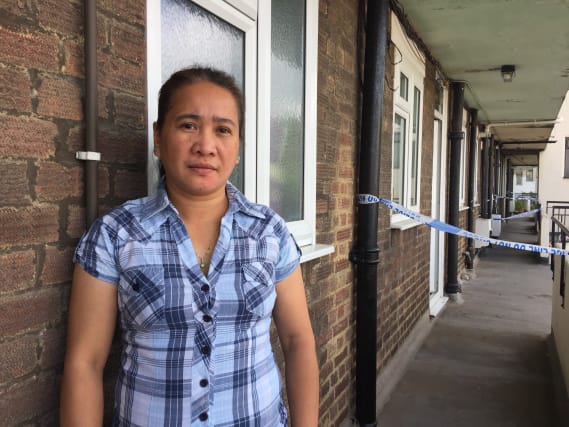 A neighbour has spoken of her shock after witnessing a mother “lying in a pool of blood” next to her lifeless infant child.

A four-year-old girl died in hospital and a 35-year-old woman is in hospital with life-threatening injuries, police said.

The pair were found with injuries inside a flat in Monarch Parade in Mitcham, south London, on Tuesday afternoon.

Their neighbour, Elsa Gonzales, 47, described hearing screaming and crying coming from the flat next door, where a family-of-four from Sri Lanka lived.

Mrs Gonzales, who used to work in an emergency department, said she rushed into the flat to find the mother and child in the bedroom.

“I saw the woman lying on the floor in a pool of blood,” she told the PA news agency.

“There was blood everywhere.

“I looked on the bed and saw the girl, she was covered in a blanket.”

Officers and paramedics arrived at the scene at around 4pm.

The girl was taken to hospital where she was pronounced dead shortly afterwards, while the woman’s injuries are described as life-threatening.

Police said no arrests have been made and they are not looking for anyone else in connection with the incident.

Mrs Gonzales, who has lived at Monarch Parade for 12 years, said: “It’s really breaking my heart, the child was a smart kid, she was always smiling.

“She was a cheeky little girl, always playing with the neighbourhood kids.

“To see her so lifeless, it’s like my heart is bleeding.

A 15-year-old Sri Lankan girl, who lives on the same block and wanted to remain anonymous, said her family were friends with the mother and child.

She named the four-year-old girl as Saygi, and described her as “playful and talkative”.

She told PA: “They were a happy family, we knew them for about seven years.

“We feel sad hearing the news.”

An 18-year-old woman from Mitcham, who gave her name as Bethany, laid flowers at the scene on Wednesday morning.

She told PA: “You should always pay your respects, especially when a little child has died.”