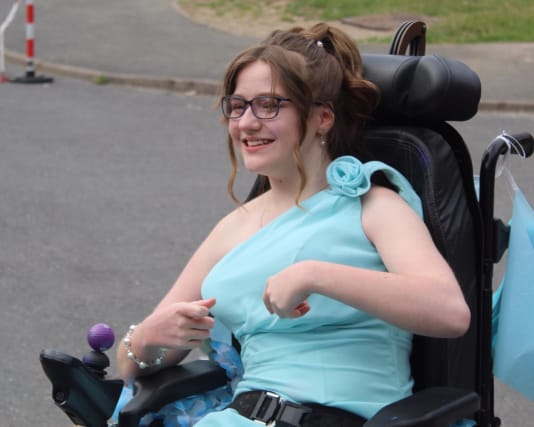 After 16-year-old Stacie Stroud’s prom was cancelled because of the coronavirus, a group of her neighbours and friends came together to organise a night she would not forget.

The teen, who has cerebral palsy and epilepsy, was “devastated” after the leaving do was called off, and her neighbours threw her a street prom to make up for it instead.

The whole community in Andover, Hampshire, worked together preparing for the evening on Friday June 26, with her father Steve, 42, decorating the street with fairy lights and balloons.

Stacie was unaware of what was being planned and spent the day inside with her sister, Samantha, 19, who did her hair and make up.

She was picked up by her grandfather in his yellow van — her original prom transport — and driven around for an hour before arriving back home at the prom to cheers from the gathered crowd.

Her mum, Sarah Stroud, 42, told the PA news agency: “We were all out there all day cleaning, and putting decorations up. We had a photo prop area, and there was hand sanitiser everywhere so people could clean up before and after.

“We had a bit of a socially-distanced disco in the evening.

“She cried when she arrived.”

Stacie’s head of year also turned up dressed up in a tuxedo for what Sarah called an “emotional evening”.

“Stacie spent the evening dancing around in her wheelchair. She took some photos and had a chat with the neighbours,” she said.

“She’s always quite bubbly and chatty with people she knows quite well, like the neighbours. They treat her like they would anyone else, which is what she wants.”

The teen, who aspires to be a chef, is now planning on going to college to study hospitality and catering after her final school year was abruptly brought to an end because of the coronavirus pandemic.

“She was originally quite stressed about doing GCSEs,” said Sarah.

“Last year during the mock exams she got quite stressed and had a seizure, so not doing them, she relaxed a bit more knowing she didn’t have to do that.”