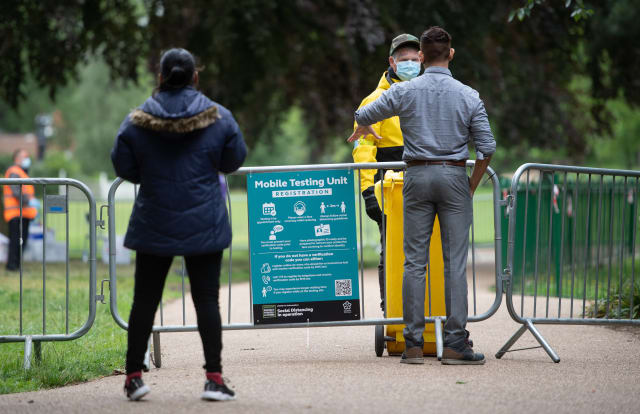 Pubs, restaurants and hairdressers in Leicester may be forced to stay closed for two more weeks after a rise in coronavirus cases, the city’s mayor has suggested.

Sir Peter Soulsby heavily criticised the Government over its handling of the situation in the city, saying he needs to “be convinced” that an extension to lockdown is necessary.

He said a Public Health England (PHE) report sent to him overnight had been “cobbled together” and “readily acknowledges” that cases are higher in Leicester due to higher levels of testing in the city.

The report said current restrictions in place across England should be extended in Leicester for a further two weeks, he said.

This means that pubs, restaurants, hairdressers, outdoor playgrounds and other areas would need to stay closed and not reopen as planned on July 4.

Leicester has recorded 866 new cases of coronavirus in the last two weeks – leading to speculation over the weekend that the city would be locked down.

Sir Peter told Sky News: “Despite all of our asking, (the PHE report) does not explain why they feel it is necessary to take special action here in Leicester.

“I’m not saying we shouldn’t take special action, I’m just saying that I and the people of Leicester would need to be convinced that there was something unique about our city before we agreed to an extension of the lockdown.”

Asked if he is prepared to continue lockdown for two more weeks, he said: “I’m saying we need to be convinced that there is a case for doing that.

“First of all, that there is something special about the spread of the virus in Leicester – we’ve got no evidence to convince us of that – and that if Leicester was to remain restricted for longer than the rest of England that that would actually make a difference to something.”

Sir Peter said the Government has yet to explain how any lockdown would be enforced in Leicester, in which parts of the city and how it would work.

Asked if he believes pubs and restaurants will be reopening on July 4 in the city, he said: “That is what happening across England on Saturday the 4th of July and they will, I expect – unless we get instructions to the contrary – be happening here, as they ought to be along with the rest of England.”

Earlier, Sir Peter said the document sent to him by PHE at 1am had “very little substance”.

He also said there had been “incredible frustration” in getting figures out of the Government “after weeks of asking”.

He told the BBC: “It was only last Thursday that we finally got some of the data we need but we’re still not getting all of it and it was only at 1.04am that the recommendations for Leicester arrived in my inbox.

“I’ve looked at this report and, frankly, it’s obviously been cobbled together very hastily.

“It’s superficial and its description of Leicester is inaccurate and certainly it does not provide us with the information we need if we are to remain restricted for two weeks longer than the rest of the country.”

Leicester public health director Ivan Browne was also critical about the level of information given to the city to tackle the outbreak.

“Interestingly it’s very much around the younger working-age population and predominantly towards the east part of our city,” he said.

“I don’t think at the moment we’re seeing a single cause or a single smoking gun on this, so we need really try to dig down and find out what is going on and it’s likely to be a combination of factors.

“Information has been challenging all the way through this.”

On Sunday, Home Secretary Priti Patel, in interviews with broadcasters, appeared to confirm Leicester would be locked down.

But Jonathan Ashworth, shadow health secretary and Leicester South MP, said Ms Patel had “got slightly in a muddle” about a possible lockdown.

Meanwhile, Boris Johnson, speaking on Monday, said that the Government is “concerned about Leicester”.

“I want to stress to people that we are not out of the woods yet. We are making these cautious, calibrated steps, we are opening as much of hospitality as we can on July 4, opening as much of the economy as we can – some things, alas, still remain closed until they can become Covid secure.

“But to make all that possible we have to remain vigilant.”

He said a “whack-a-mole” strategy to contain local outbreaks had worked in Weston-super-Mare and where there had been outbreaks around GP surgeries in London.

“That’s the same approach that we will bring to bear in Leicester as well,” he said.

He said he had spoken to Health Secretary Matt Hancock, adding: “I don’t believe a local lockdown in Leicester is about to be proposed.”

Speaking to the newly launched Times Radio earlier on Monday, Mr Johnson said the coronavirus pandemic has been an “absolute nightmare” and a “disaster” for the country.

“This has been a disaster, let’s not mince our words, this has been an absolute nightmare for the country,” he said.

“The country has gone through a profound shock. But in those moments you have the opportunity to change and to do things better.

“We really want to build back better, to do things differently, to invest in infrastructure, transport, broadband – you name it.”

He said there will be “some bumpy times” ahead but the UK will get through the economic fallout, adding that people “instinctively” knew it would be tough.

The PM insisted now is not the time to “step back” from supporting the economy, adding: “What we’re going to be doing in the next few months is really doubling down on our initial agenda which was all about investment, if you remember, in infrastructure, in education, in technology, to bring the country together.”