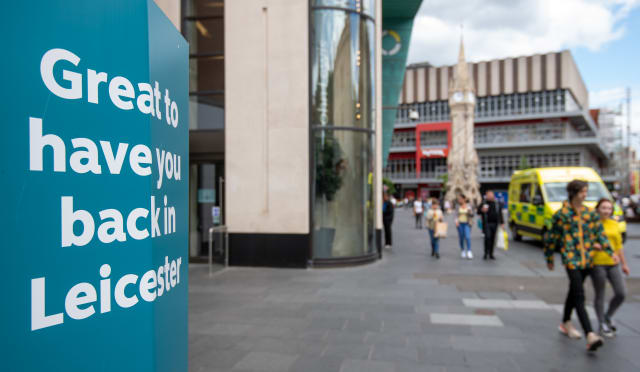 More coronavirus testing data is needed before deciding whether to implement a local lockdown in Leicester, its city mayor has argued.

Sir Peter Soulsby said the information was "key to determining what intervention is needed" to respond to a recent surge in Covid-19 cases.

It follows a report that Leicester could be subject to Britain's first local lockdown this week.

The Sunday Times said the Government was preparing to impose the lockdown "within days" after a rise in coronavirus cases in the city.

On Sunday, Home Secretary Priti Patel, in interviews with broadcasters, appear to confirm such reports.

"Well, that is correct," said Ms Patel, when asked by the BBC's Andrew Marr whether they were accurate.

She added: "There will be support going into Leicester and in fact the Health Secretary was in touch with many of us over the weekend explaining some of the measures, the support on testing, resources that will go into the local authority as well."

But Sir Peter said: "More testing and immediate access to the data is key to determining what intervention is needed.

"Whether that intervention is giving more advice or something more dramatic we don't yet know.

"If it is decided that a local lockdown is needed the city council currently has no powers to implement this, and there would need to be extensive discussion around the area to be locked down, including whether this extends beyond the city boundaries."

Sir Peter and Leicester City Council's director of public health Ivan Browne are due to meet with Government officials on Monday morning to discuss the latest data.

Speaking to BBC Radio 4's World At The Weekend programme, Mr Ashworth said he had been in touch with health secretary Matt Hancock, adding: "Based on the conversations we've had in the last 24 hours I don't believe a local lockdown in Leicester is about to be proposed."

Leicester City Council said it was provided detailed coronavirus testing information for the first time on Thursday, a week after the Health Secretary announced there was a local outbreak in the area.

Lots of speculation today about a lockdown in #Leicester due to increase in #coronavirus cases. Reality is, still analysing data just received from Gov (after weeks of asking). When we know more we can decide what action, if any, is needed. More here https://t.co/PfbqOHuUMkpic.twitter.com/KcZpxQEWkw

The council said Public Health England figures show that 2,987 Covid-19 cases have been confirmed in Leicester since the start of the epidemic.

Of these, 866 cases were reported in the last two weeks.

The council asked the Government for more data after its public health team noticed the surge in positive cases.

It said information covering ethnicity and the postcodes of those being tested had not previously been provided.

The Government has agreed to provide more testing facilities in Leicester and the council has been working with Public Health England to reinforce guidelines around social distancing, hand hygiene, and to introduce local messaging around limiting contact with others.

Earlier on Sunday, the Department of Health and Social Care stopped short of saying a local lockdown was likely for Leicester, but acknowledged the city was an area of concern as it urged residents in the city to be vigilant against the virus.

"We are supporting the council and local partners in Leicester to help prevent further transmission of the virus," the spokesman said in a statement.

"We have deployed four mobile testing sites and made thousands of home testing kits available, to ensure anyone in the area who needs a test can get one.

"NHS Test and Trace will contact anyone testing positive to help them identify their recent contacts and advise who may have been near to someone with the virus to stay at home to prevent the spread.

"We urge the people of Leicester to continue to practice social distancing, wash their hands regularly, get tested immediately if they have symptoms and follow the advice they receive if contacted by NHS Test and Trace.

"This advice is there to protect communities and save lives."