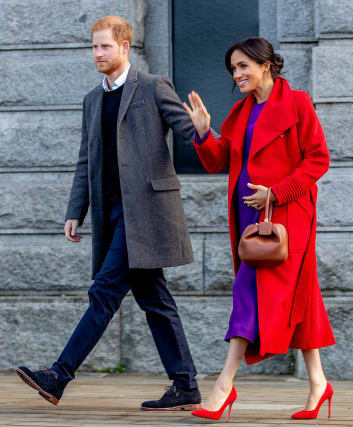 The Duke and Duchess of Sussex have been working behind the scenes to urge top executives across the world to stand in solidarity with groups which are calling for a Facebook boycott.

Harry and Meghan have spoken with a number of organisations leading the Stop Hate for Profit campaign, which is calling on businesses to pause advertising on the platform over the social network’s failure to do more to remove hate speech.

The couple, who are now living in Los Angeles with their son Archie after quitting as senior working royals in March, have been preparing to launch their new charitable organisation, Archewell.

After the death of George Floyd, whose killing in May sparked a wave of Black Lives Matter protests across the world, the couple had conversations with groups including the NAACP, Color of Change, and Anti-Defamation League.

These revolved around how online platforms have created the conditions for hatred, bigotry, radicalism and violence to grow and spread, a source working closely with the couple on their new organisation said.

Their conversations with chief executives behind the scenes have been wide-ranging, from the tech and media sectors, to consumer goods, food and drink, and clothing.

The source said: “As we’ve been developing Archewell, one of the areas the Duke and Duchess of Sussex have been keen to address is online hate speech, and we’ve been working with civil rights and racial justice groups on it.

“Over the past few weeks, in particular, this issue has become even more vital and they have been working to encourage global CEOs to stand in solidarity with a coalition of civil and racial justice groups like the NAACP, Color of Change, and the Anti-Defamation League, which are calling for structural changes to our online world.”

Color of Change president Rashad Robinson tweeted his thanks to Harry and Meghan for their support.

He said: “I’ve appreciated the thoughtful conversations I’ve had with the Duke and Duchess. Even more, I appreciate that they are using their platform to reach out to key corporations and share the goals of the #StopHateForProfit campaign.”

The NAACP tweeted: “We are grateful for the leadership of the Duke and Duchess of Sussex in recognising the importance of solidarity in this moment. Your commitment to truth, justice, and equality are appreciated.”

Last week, ice-cream maker Ben & Jerry’s, and clothing retailers The North Face, Patagonia and REI all said they would be pulling advertising from Facebook as part of the movement.

In a video message earlier this month, Meghan made an impassioned speech to her former high school about Mr Floyd’s death.

She told girls graduating from Immaculate Heart High in Los Angeles about her “absolute devastation” over racial divisions and his death, which happened after a white police officer held him down by pressing a knee into his neck for almost nine minutes.

The duchess recalled witnessing the LA riots in 1992, and told students that Mr Floyd’s life mattered.

She added: “I’m so sorry you have to grow up in a world where this is still present.”