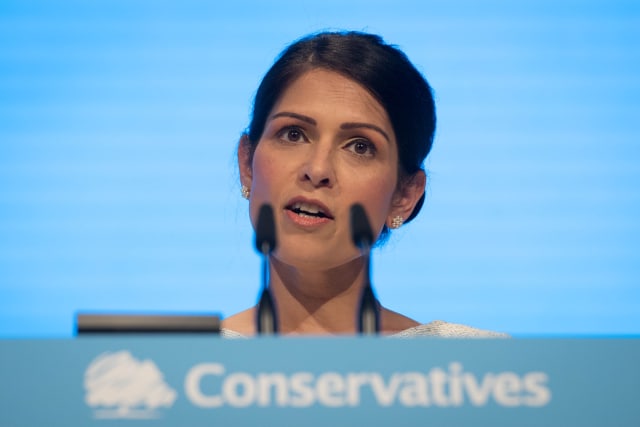 Home Secretary Priti Patel has warned the rise of mass gatherings witnessed in recent days was “unacceptable” and that it risked a second deadly spike of coronavirus.

Ms Patel, in interviews with broadcasters, also confirmed reports that Leicester faced becoming the first area to have a local lockdown imposed following a surge in infections.

Police in London had to disperse crowds causing “significant disruptions” at two unlicensed music events in south London on Saturday night while the Liver Building in Liverpool was set on fire on Friday as fans gathered to celebrate Liverpool FC’s Premier League title win.

Ms Patel said police would continue to break up such gatherings and that the “full force of the law” would come down on those found guilty of assaulting emergency service workers.

Officers in Liverpool were subject to “violent confrontations” while dozens of Metropolitan Police officers were injured in aggressive scenes as they attempted to shut down late-night parties in Brixton on Wednesday evening and in Notting Hill on Thursday.

“The violence we’ve seen against our officers is also unacceptable.

“My message is the same – I would urge people not to participate in gatherings of that nature or protests, but I would also add if people do assault police officers, they will feel the full force of the law.

“It is simply unacceptable to have people gathering in these awful ways that we have been seeing.”

She told BBC One’s The Andrew Marr Show that Liverpool fans “did not need to go to the football ground and congregate outside the stadium” to celebrate their team’s first top flight title in 30 years.

Ms Patel warned that a second wave of Covid-19 would devastate the UK’s economy, saying she could not “think of anything worse than us having another wave of this awful disease”.

The Cabinet minister confirmed a report in the Sunday Times about the Government preparing to impose a lockdown “within days” on Leicester after a hike in coronavirus cases in the city.

The paper said Health Secretary Matt Hancock had been examining legal aspects of the shutdown after it was revealed 658 new cases were recorded in the Leicester area in the two weeks to June 16, having announced he was sending in a mobile testing unit to uncover how far Covid-19 had spread.

Ms Patel said the Government was supporting the local authority to take the necessary steps to “control the virus”.

“Well, that is correct,” said Ms Patel, when asked by the BBC’s Andrew Marr whether Leicester was going to see new restrictions imposed.

She added: “There will be support going into Leicester and in fact the Health Secretary was in touch with many of us over the weekend explaining some of the measures, the support on testing, resources that will go into the local authority as well.

“With local flare-ups it is right we have a localised solution in terms of infection control, social distancing, testing and many of the tools actually within the Public Health England space which will come together to control the virus, to stop the spread so obviously we can get on top of the infection.”