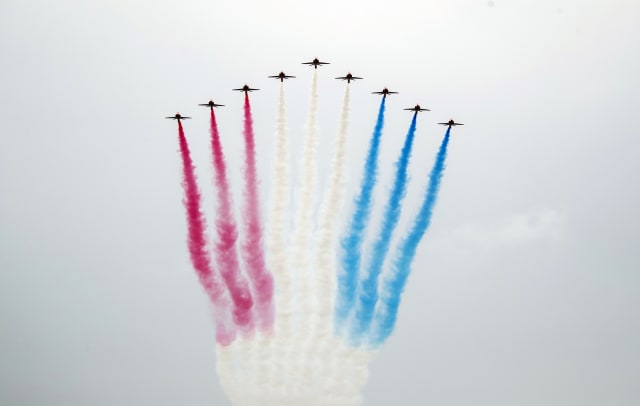 Scarborough will host an “even bigger and better” national event for Armed Forces Day in 2021, after plans for this year were postponed due to the coronavirus pandemic, a council leader has said.

Steve Siddons, leader of Scarborough Borough Council, said it was “disappointing” that events had to be cancelled, but added they were now looking forward to next year.

The week-long event has instead been held online, but culminated in a flag-raising ceremony at Scarborough Castle, with a flypast by the Red Arrows on Saturday.

Mr Siddons said plans for 2020 included flypasts, more than 1,000 people marching along the seafront, and ships in the harbour, and was expected to have attracted more than 100,000 visitors during the week.

He said: “We were very disappointed that, because of the coronavirus, the national Armed Forces Day, which we were hosting this year, had to be cancelled.

“But we were not to be thwarted, we have organised a virtual Armed Forces Day up in Scarborough, and that’s culminated in a flag-raising ceremony, which has just taken place up here on the castle headland, in front of the amazing Red Arrows acrobatic team, who’ve flown over the castle and given us a fantastic display.”

He added: “But what we’re looking forward to now is next year.

“Next year, we’ve been honoured to be made national Armed Forces Day event for next year, 2021, so the work starts again now to work towards that, with all our colleagues from the three forces, and it’s going to be an even bigger and better event, I’m quite sure of that.”

Mr Siddons said Scarborough has “very long connections” with the military, with a large number of veterans living or working in the North Yorkshire town.

Commodore Phil Waterhouse, naval regional commander for the north of England for the Royal Navy, said: “Today should have been the Armed Forces Day national event.

“Scarborough bid for it a couple of years ago and had the honour of being given the national event to run, and we would have run it in conjunction with the council down there in South Bay, and it would have been full of sailors, soldiers, airmen putting on shows, and showing off what we can do for the day, in order that the town and country can say ‘thank you very much for what you do for the country’.”

He described the cancellation as a “huge disappointment but totally understandable”.

He said: “Many of our service personnel have been away helping the NHS and helping local councils in this pandemic, but Armed Forces Day this year hasn’t been cancelled, we’re just doing it a different way.

“In the main we’re doing it virtually and there are some cracking opportunities to get on to websites and hear messages, send messages, understand what the armed forces do and then, in a few instances, there have been ceremonies like this where we’re doing the flag-raising, but no-one else has had the beauty of the RAF Red Arrows over-flying them.”

Events can be viewed at scarborougharmedforcesday.co.uk.