Museum bids to get to the bottom of best exhibit 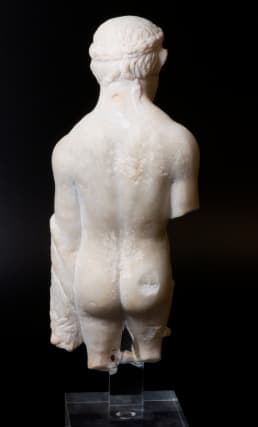 Museums across the world are competing to find which contains the “best bum” as part of a weekly online battle between curators.

Yorkshire Museum, in York, launched the search on social media on Friday, with a picture of a Roman marble statuette with what appears to be a bite-sized chunk missing from its behind.

The tweet has since received hundreds of replies, with bottoms from a range of items, including statues, paintings, photographs, animals, skeletons, insects and vehicles.

The museum has been running the “curator battle” throughout lockdown, giving museums worldwide the chance to display some of their most interesting objects to a global audience.

It introduced the latest contest with a tweet, which said: “Today’s theme is #BestMuseumBum!

“This cracking Roman marble statuette depicts an athlete at the peak of fitness. It may have decorated the town house of one of Eboracum’s wealthier residents. Has someone taken a bite out of this?”

The Royal Armouries, in Leeds, replied with a picture of its collection of Henry VIII’s combat armours.

“You can track Henry VIII’s burgeoning bottom through our collection of his combat armours. The Tudor tubster went from a modest 32in waist in 1520 to a whopping 51in booty by 1540.

International entries included the Ota Memorial Museum of Art in Tokyo, Japan, with its paintings of sumo wrestlers by artist Katsushika Hokusai.

It commented: “How about these bums of sumo wrestlers in our collections?

“These bums were painted by Hokusai.”

Cape Fear Museum in Wilmington, North Carolina, USA, was one of many to offer a saucy seaside postcard as its entry.

Tweeting a picture of the card, which features a man waterskiing naked apart from a cowboy hat and boots, the American museum said: “Imagine getting this in the mail!”

A spokesman for the York Museums Trust said: “We have been running the curator battles throughout lockdown and they have proved really popular.

“It is a chance for museums big and small to share their objects under a given theme to create what essentially become global online exhibitions.

“We have run a variety of different themes over the weeks but best museum bums is proving one of the most popular yet – it’s great to see museums around the world sharing their cheekiest objects.”

Yorkshire Museum issues a new curator battle on its Twitter feed every Friday.