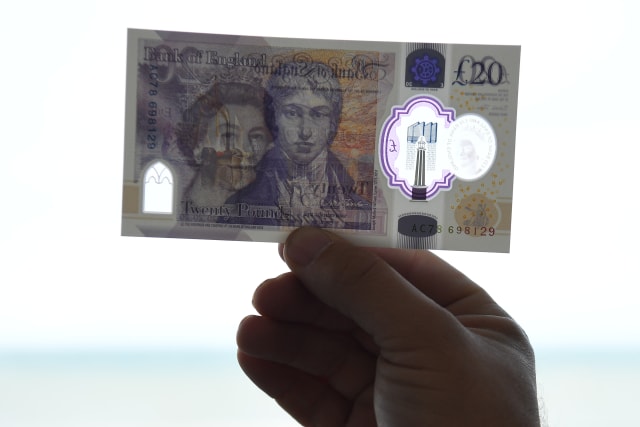 More than a third of people say they have still not yet used one of the new polymer £20 banknotes that have been in circulation since February.

Some 37% of people said they are yet to use one of the banknotes, which features artist JMW Turner, Nationwide Building Society found.

The new Bank of England notes were issued from February 20, about a month before the coronavirus lockdown started on March 23.

Various reports have pointed to a decline in people using cash during the lockdown, with ATM withdrawals down generally across the UK compared with last year and many stores encouraging people to make card payments.

In April, the spending limit for a contactless card payment was raised to £45, from £30 previously.

More than 2,000 people were questioned between June 8 and 9.

Nationwide’s own data suggests people have been withdrawing larger amounts of cash when they do visit an ATM, as the coronavirus crisis has continued.

In January and February, the average withdrawal was for just over £80, but in March it was close to £100, and between April and June about £120 was taken out per withdrawal.

Mark Nalder, head of payments at Nationwide, said: “While we can’t predict the future usage of cash after the outbreak, we can expect to see a steady rise in withdrawals as we begin to return to normal life.

“But what we do know is that cash represents safety and security to many, particularly in difficult times.”