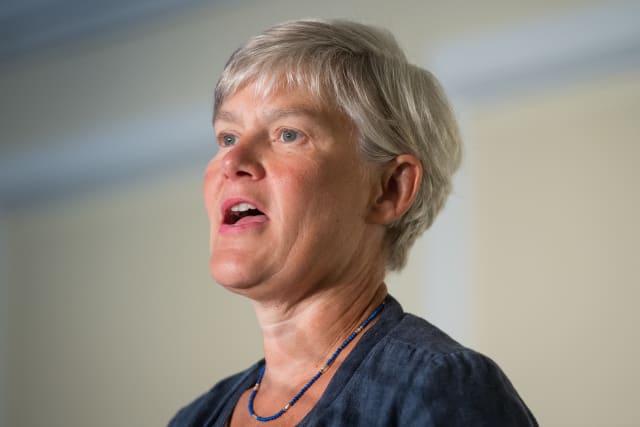 Ms Long-Bailey, a fellow leadership contender in this year’s race to replace Jeremy Corbyn, was dismissed for sharing an article online containing an allegedly anti-Semitic conspiracy theory on Thursday.

There had been calls from MPs on the left of the party for the former shadow Treasury minister to be reinstated, but Sir Keir dismissed the demands following a meeting with riled backbenchers, saying his mind was made up.

He has hand-picked Ms Green, MP for Stretford and Urmston, to replace Ms Long-Bailey.

Prior to her election in 2010, the 60-year-old was chief executive of the Child Poverty Action Group and before that was director of the National Council for One Parent Families, now known as Gingerbread.

“Kate has spent a lifetime campaigning against child poverty and educational inequalities.

“I look forward to working with her in this new role.”

For Ms Green, it is a return to the shadow cabinet after serving as shadow minister for women and equalities under Mr Corbyn’s leadership.

She quit after the referendum, in what was seen by left-wing critics as a coup against the Islington North MP, and went on to chair Owen Smith’s failed leadership bid.

Sir Keir gave her the role of shadow minister for child poverty strategy in April, before elevating her to education spokeswoman two months on.

Ms Green said: “It’s a privilege to have been asked to serve as shadow education secretary.

“The coronavirus pandemic has had a devastating impact on children’s education.

“I look forward to working with teachers, unions, parents and councils to help ensure we get our children back in school as soon as possible.”

On Friday, members of the Campaign group of MPs held a conference call with Sir Keir to protest against Ms Long-Bailey’s dismissal as shadow education secretary.

Sir Keir, speaking to the PA news agency on Friday, said the meeting with concerned MPs was “constructive and the tone was absolutely right”, but ultimately ended in disagreement.

“We engaged for about an hour in discussion but my mind is made up on this,” he said.

“I took my decision yesterday and put my statement out yesterday.”

Ms Long-Bailey was fired on Thursday after refusing to take down a tweet linking to an interview with the actor Maxine Peake in which she claimed police linked to the death of George Floyd in the US had learned their tactics from the Israeli secret services.

The former shadow education secretary, however, insisted it was not “racist or anti-Semitic” to draw attention to concerns about police tactics.

The speed of Sir Keir’s decision to move against her was being seen as fresh evidence of his willingness to take on the Corbynistas.

She was the favoured candidate of the left when she stood against him in the Labour leadership election earlier this year.

Despite unhappiness among supporters of the former leader, there was no sign of any other left-wing frontbenchers being prepared to resign in protest, while Ms Long-Bailey insisted she would continue to work for a Labour government.