Glasses and bottles thrown at police amid ‘violent confrontations’ in Liverpool 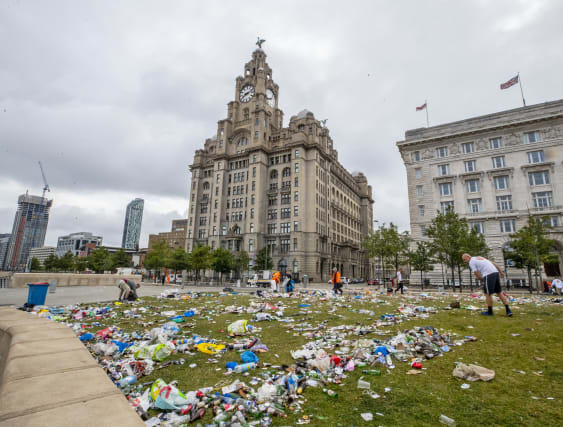 Police officers had glasses and bottles thrown at them in violent confrontations with Liverpool fans celebrating the club’s Premier League win, a police chief has said.

Merseyside Police Assistant Chief Constable Jon Roy said the two officers needed medical treatment for injuries to their backs after bottles were thrown at them as they went to help an assault victim in a crowd of supporters at the Pier Head on Friday night.

He said later a group of about 100 people threw glasses and bottles at riot police as they tried to stop them committing acts of disorder in the city centre.

In scenes which were described as “wholly unacceptable” in a joint statement by the club, police and Liverpool City Council and “heartbreaking” by the city’s mayor, thousands of Liverpool fans ignored lockdown restrictions to gather at the Pier Head on Friday night and mark their team winning the Premier League for the first time in 30 years.

During the celebrations a firework was launched at the Liver Building, causing damage to the floor of a balcony.

Mr Roy said: “The crowd largely dispersed by about 1.30am and a short time later officers were confronted by a group of people more than 100 strong who sought confrontation with the police.

“They were committing acts of disorder and then threw glasses and bottles at the police when they tried to intervene.

“Specially trained officers in protective kit had to disperse them and we then had a number of really violent, absolutely unacceptable, incidents of violence and disorder throughout the city centre.”

Fifteen people have been arrested for public order offences and one man was arrested on suspicion of assault, he said.

Mr Roy said by the time police arrived at the Pier Head at about 4pm around 500 people were already there and within 35 minutes the numbers had doubled and people were continuing to arrive.

He said the decision was made to safely manage the situation after the risk of police intervention was assessed.

A Section 34 dispersal order was later put in place for the city centre, allowing police to disperse the crowds who had gathered.

Mr Roy said a seven-day policing operation was under way to try and prevent further gatherings and CCTV was being examined to identify those involved on Friday, including the person who launched a firework at the Liver Building.

“We’ve got their image, we will soon know who they are and we will come to get them,” he said.

A joint statement on behalf of the club, Liverpool City Council and Merseyside Police, said: “Our city is still in a public health crisis and this behaviour is wholly unacceptable.

“The potential danger of a second peak of Covid-19 still exists and we need to work together to make sure we don’t undo everything that has been achieved as a region during lockdown.”

Mayor of Liverpool Joe Anderson wrote a letter to the people of Liverpool to express his “sadness and disappointment”.

He said: “Seeing thousands of people congregating at the Pier Head into the early hours and the ugly scenes shared on social media afterwards was heartbreaking to see.

“Fireworks, flares and tonnes of litter, amount to nothing but disrespect for our city.

“Like many others, I became emotional out of frustration at what I was seeing.

“This mindless behaviour has the potential to damage Liverpool’s reputation – both the club’s and the city. I don’t believe this is how the team would like their achievement to be remembered.”

Chief Constable Andy Cooke said the actions of a minority were “not only irresponsible, but criminal”.

He said: “The threat from this pandemic will end. It will then be safe to celebrate in the right way.

“For the good of your city, your club, and most importantly those who are at highest risk of dying of this disease, stay at home and keep others safe.”