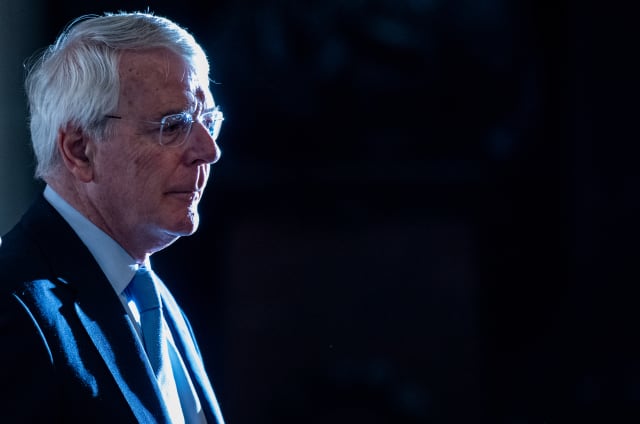 Boris Johnson has been urged by a former prime minister to borrow to fuel the UK’s recovery after the coronavirus downturn, as he prepares to lay out his vision for an economic bounce-back.

Sir John Major argued that tax rises were not suitable in the short-term, meaning the Government should exploit low interest rates to set the conditions for economic growth.

The intervention by the ex-Tory leader comes as the Prime Minister prepares to make a speech next week announcing his blueprint for lifting the worst recession in generations, according to a report in the Telegraph.

In reports Downing Street did not deny, Mr Johnson is said to be due to give a speech on Tuesday in the north of England to unveil a programme of infrastructure projects.

He is expected to announce plans to “invest billions” of pounds in deprived areas, including major road and rail schemes to improve transport to towns where connections are poor.

The Telegraph said the investment was likely to be paid for through borrowing.

The move would satisfy Mr Johnson’s predecessor Sir John, who declared that tax rises during the current situation would be a “mistake”.

Speaking to BBC Radio 4’s Today programme, the former chancellor said: “I think to put up taxes before the economy has recovered, which may take a while, would in my view be a mistake.

“But, over time, I think there is little doubt that taxes are going to rise.

“For the moment, because interest rates are so low and likely to remain so, it is possible for borrowing to take the strain in the way it couldn’t have done a quarter of a century ago.”

Asked whether further borrowing was suitable when debt levels were currently 100% of national income, Sir John said: “I think it is going to be inevitable in the short term.

“I think there is scope in the short term – not forever, there is no magic money tree, let me make that clear – but for a period until the economy is recovered, and taxes for some people can then go up.”

Sir John, whose government presided over the collapse of the pound on Black Wednesday in 1992, said the Covid-19 pandemic had given new impetus to securing the long-term future of social care.

Mr Johnson vowed to publish his proposals for reforming social care this year but Health Secretary Matt Hancock warned this month that the Covid-19 efforts could see the plans delayed.

Sir John said: “I think it has been undervalued and I don’t think it is possible any longer to undervalue it.

“It seems to me it is going to be inevitable that the Government take a greater role in what happens in terms of the future in terms of social care simply because there is nobody else who can do it.

“The attractions of very small government are always ideologically obvious but the practicalities from where we are at the moment are that the Government is going to have to take the lead in policies that deal with many of these social problems that have existed.”

In a wide-ranging interview, he also said “ending dependence on food banks was essential”, adding: “It is truly shocking that we have food banks in 2020.”