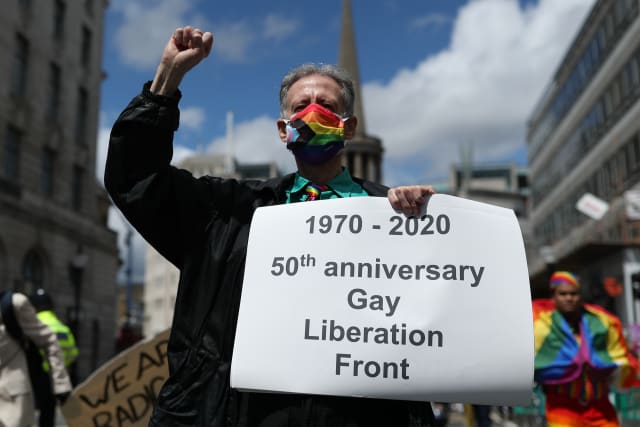 Pride celebrations were moved online amid the coronavirus pandemic, while smaller crowds than usual took to the streets of London.

One of the largest Pride events is usually in the capital, which attracts hundreds of thousands of people each year, but the 2020 event due to take place on Saturday was postponed due to Covid-19.

A crowd gathered at Hyde Park Corner before a march, with many wearing face coverings and carrying placards displaying messages such as “Silence is violence”, “Protect trans youth” and “No justice, no peace”.

The activists, some of whom are in their 70s and 80s, marched the route usually taken by the Pride In London parade calling for political action including the end of deportations for LGBT asylum seekers.

Mr Tatchell, 68, told the PA news agency: “Today’s march is a celebration of the 50th anniversary of the Gay Liberation Front.

“We are seeking to reclaim Pride as an event for LGBT+ human rights.”

Mr Tatchell added: “We hope that our protest will encourage people to remember the long, difficult struggle for LGBT+ rights and remember that here in Britain, and around the world, there are still battles to fight and win.”

He said that due to Covid-19 and underlying health conditions that just around a dozen GLF veterans would be joining the march.

Mr Tatchell added: “As well as campaigning for LGBT+ rights, we are expressing our solidarity with Black Lives Matter, and black LGBT+ people.”

Many members of the LGBT community have opted to hold online celebrations throughout Pride month.

One such event is a 24-hour live stream celebration, Global Pride, which took place on Saturday from 6am.

Many celebrities were also expected to take part and perform in the live stream such as Sir Elton John, Stephen Fry and Natasha Bedingfield.

Online events will continue after Saturday, with charities including Amnesty International and Stonewall starting a week of celebration on Sunday.

The Pride Inside events will include LGBT performers and speakers and will last until July 5.

This weekend’s Pride celebrations come a week after three men were killed in a terror attack in Reading which particularly affected the town’s LGBT community.

Joe Ritchie-Bennett, James Furlong and David Wails were killed during the incident in Forbury Gardens on June 20.