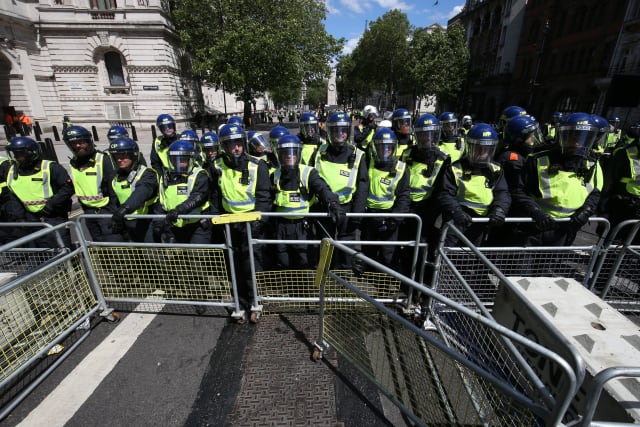 Police have released another 10 images of people they want to question over violent clashes at protests in London in recent weeks.

At least 100 officers have been injured policing Black Lives Matter demonstrations and counter-protests staged by the far right since late May.

The protests were sparked by the killing of George Floyd, a black man, in the US state of Minnesota when a police officer knelt on his neck for almost nine minutes.

So far, 238 people have been arrested in connection with the protests, including five more on Friday, and the Metropolitan Police said the latest images are of people believed to have engaged in “serious violence and violent disorder”.

Commander Bas Javid, of the Met’s frontline policing team, said: “Our investigation into violent disorder at several protests in central London over the past few weeks remains ongoing.

“We are continuing to arrest those responsible, including another five people yesterday, and I would like to thank everyone who has contacted us in response to our recent appeals.

“Whilst we acknowledge that the vast majority of people who attended the recent protests – and, who are continuing to protest – in order to make their voices heard, have behaved peacefully, we witnessed a minority who were intent on behaving violently and causing harm.”

He added: “The violence that was directed towards police officers will not be tolerated.

“Today, we have issued images of a further 10 people who we need to identify and speak with. And I would again encourage anyone who recognises them to phone police.”

Detectives have been carefully analysing hours of CCTV, body worn video from officers, as well as footage which has been widely circulated on social media.