Why was Long-Bailey sacked, and why is anti-Semitism an issue for Labour? 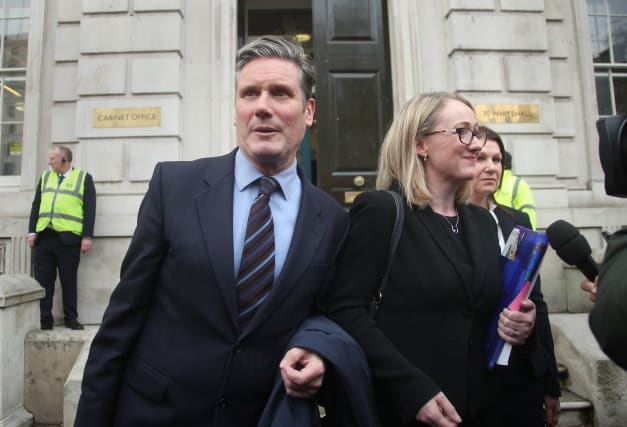 Rebecca Long’s sacking by Labour leader Sir Keir Starmer has put the spotlight back on the issue of anti-Semitism in the party.

What happened, and what is the history of the issue within the party?

Why was Rebecca Long-Bailey sacked?

The former shadow education secretary shared an interview with actress Maxine Peake in which Ms Peake suggested police linked to the death of George Floyd in the US had learned their tactics from the Israeli secret services.

Alongside the retweet of the interview with the Independent, Ms Long-Bailey posted a comment calling Ms Peake an “absolute diamond”.

The claim has been denied by Israel, and Ms Peake later said it was wrong.

In a statement following her sacking, a spokesperson for party leader Sir Keir Starmer said that the article had contained “an anti-Semitic conspiracy theory”.

The statement reiterated Sir Keir’s desire to fight anti-Semitism and said he “has been clear that restoring trust with the Jewish community is a number one priority”.

What did Rebecca Long-Bailey say about the incident?

In a later tweet, Ms Long-Bailey said her sharing of the interview “wasn’t intended to be an endorsement of all aspects of the article”.

In a later thread following her sacking, the MP for Salford and Eccles said: “After posting I was subsequently instructed to take both this agreed clarification and my original retweet down.”

The former leadership candidate added: “I had asked to discuss these matters with Keir before agreeing what further action to take, but sadly he had already made his decision.”

As of Friday morning, the original retweet referring to Ms Peake as an “absolute diamond” is still on Long-Bailey’s Twitter page.

Does Long-Bailey have the support of other Labour figures?

A prominent supporter of Ms Long-Bailey has claimed that the tweet was anti-Israel, rather than anti-Semitic.

Former shadow chancellor John McDonnell, who supported her leadership bid, said: “Throughout discussion of anti-Semitism it’s always been said criticism of practices of the Israeli state is not anti-Semitic.

“I don’t believe therefore that this article is or Rebecca Long-Bailey should’ve been sacked. I stand in solidarity with her.”

Unite general secretary Len McCluskey said her sacking was “an unnecessary overreaction to a confected row”.

“Unity is too important to be risked like this,” he said.

What are the party leader’s views on anti-Semitism?

Sir Keir Starmer wants to tackle the issue within the Labour Party, and when he won the leadership vowed to “tear out this poison by its roots”.

In a speech posted online following his victory, Sir Keir also apologised for pain caused to the Jewish community and said anti-Semitism had been a “stain” on the party.

He said: “I have seen the grief that it’s brought to so many Jewish communities.

“On behalf of the Labour Party, I am sorry.

“And I will tear out this poison by its roots and judge success by the return of Jewish members and those who felt that they could no longer support us.

“The Labour Party is an incredible and powerful force for good.

“Together with those that went before us we’ve changed the lives of millions of people for the better.”

Why is this such a sensitive issue in the Labour Party?

The Labour Party is currently being investigated for alleged instances of anti-Semitism by the Equality and Human Rights Commission.

The report will determine whether unlawful acts have been committed by the party or its employees, and whether Labour responded to complaints effectively.

Former leader Jeremy Corbyn was widely criticised for his handling of the issue, which many believe worsened under his leadership.

Last year, the Jewish Labour Movement (JLM) said 70 Labour staffers past and present gave sworn testimony into the official inquiry, and according to a leaked copy of its submission made while Mr Corbyn still led the party, the JLM said Labour was “no longer a safe space” for Jewish people or those who stood up against anti-Semitism.

“Since Jeremy Corbyn became leader of the Labour Party, he has made the party a welcoming refuge for anti-Semites,” it said.

“He has done that in a number of ways including by publicly supporting anti-Semites and anti-Semitic tropes. The Labour Party is cast in his image.”