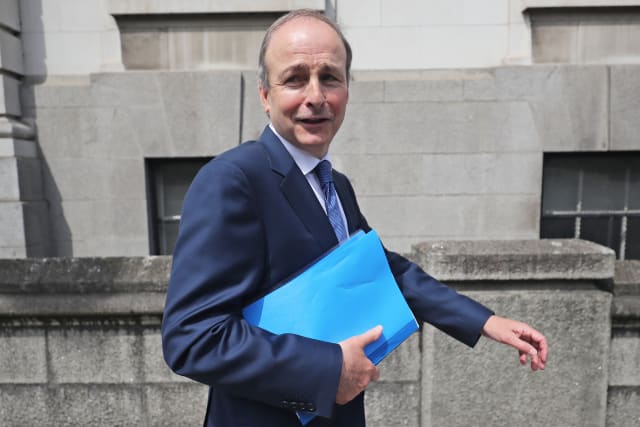 Three quarters of Fianna Fail members have backed a deal to restore coalition Government in Ireland.

Irish Taoiseach Leo Varadkar’s Fine Gael has also overwhelmingly endorsed the agreement and all eyes are now on their Green Party suitors who are still counting votes.

It has been 134 days since Ireland’s inconclusive general election.

Fianna Fail leader Micheal Martin said: “It says to me that in the context of Covid-19 and the huge challenge facing our country the members of the party are saying get on with it – get on with the work.”

Mr Martin is likely to become the next Taoiseach – if the Greens also support the deal – and could be sworn into office on Saturday.

Mr Varadkar’s party was the first to declare its result on Friday.

He said: “I am confident and hopeful that we will see all three parties endorsing this coalition agreement today, able to establish a new government tomorrow and get down to work and get busy, and that is the most important thing.”

He said his party’s 80/20 majority for the deal was very clear.

“That is a very strong mandate for a third term in Government.”

Delegates representing different parts of Mr Varadkar’s party backed the proposed programme of government by 80% to 20%.

Members of the parliamentary party and its ruling Executive Council delivered the greatest levels of support compared to 57% of local representatives.

Some Green Party members have indicated they will vote against, citing concerns about emissions and housing targets.

It needs the approval of two-thirds of its 2,000 members as opposed to a simple majority for Fianna Fail and Fine Gael.

Any administration will face an uphill task to restore an economy steered into recession by the coronavirus pandemic and government formation talks have been delayed by the emergency.

Sinn Fein won the popular vote in last winter’s general election in what its leader termed a “revolution in the ballot box”.

Attempts by party president Mary Lou McDonald to secure a coalition of the left have floundered.

The party’s historic links to the IRA have always hampered its progress among older voters and coloured the decision of Fianna Fail and Fine Gael not to enter government with them.

Those two parties have for decades swapped power between them during change elections and harbour constitutional divisions dating back to the civil war a century ago.

Following months of negotiations, their leaders agreed to enter coalition together in an historic shift.

It would promote a clear ideological divide on the economy with an opposition dominated by left-wing voices, of which Sinn Fein’s would carry the strongest mandate.

Laws enabling the non-jury Special Criminal Court to continue trying suspected gangland criminals and dissident republicans could lapse at the end of this month should the deal to form a government be rejected.